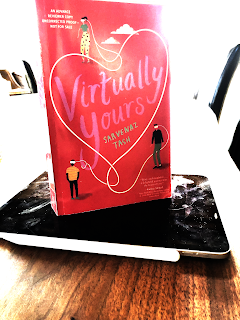 Virtually Yours by Sarvenaz Tash (June 4)
Overview: Miriam has been in a funk since she started NYU. More accurately, she's been down since her boyfriend of three years broke up with her because long distance would be "too hard". It all changes, though when Miriam decides to try a new virtual reality dating service called HEAVR. The only problem, though, is that when she accidentally matches with her ex-boyfriend, the draw of a second chance is too much to pass up. After concealing her identity, Miriam starts a hoax to get him to fall for her again. Overall: 4

Characters: 4 I liked Miriam, especially as the story progressed and she became more sure of herself. It allowed her personality to shine and gave her more dimensions than she started with. In the end, I was definitely rooting her.
Her friends at NYU are great additions to the story. Miriam's roommate Hedy is a major film buff, and, while it's pretty much her singular trait, she does offer some good advice and genuine friendship to Miriam. I also love the little glimpses we get at Hedy and her girlfriend's relationships. Jeremy is another great addition. He works at the gym with her and happens to be her 98% HEAVR match. He's the most well developed minor character, and he really brings Miriam out of her shell and gets to her to take advantage of being at college in New York.
Family is also another major part of the story. Miriam is very close to her two siblings who are also around college age. They give a great window into who Miriam was before. Her mother is also great because she tries to keep everyone connected to their Iranian roots while also being understanding of what the kids individually want and need.
Finally, there's Caleb. I'm not a huge fan of Caleb, but, of course, the author seemed to sort of against him as well, based on his position in the love triangle.

Plot: 4 Towards the end, the plot started to pick up at a far faster pace than at the beginning. It was more fun once Mariam started to step out of the confines of just using HEAVR and tailing to/obsessing about Caleb 24/7. I guess I've never been a fan of totally obsessive love stories. Getting to see Miriam go out with her friends, learn new things, and take advantage of the city added a lot. I devoured the last 200 or so pages in a single morning.

Writing: 4 The writing is bright and suits the story well. I enjoyed the real interactions between the different characters at Miriam learned and grew. Her character arch is very satisfying. There are also some interesting twists on the conventional love triangle trope that hooked me a lot more than the basic pattern does. I liked the less possessive, more friendship based twist.


If You Liked This Book...
To All The Boys I Loved Before: Review Here