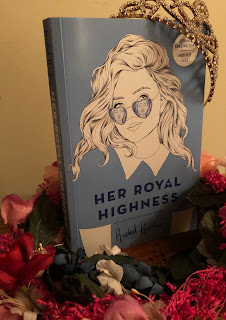 Her Royal Highness by Rachel Hawkins (May 6) Buy at Your Indie Bookstore*
Overview: In a companion book to Prince Charming (formerly known as Royals) follows another American thrown into the world of the Scottish Royal Family. This time, it's Millie from Texas in the spotlight. After she wins a scholarship to the elite Scottish boarding school where the royals attend, the quickly meets Princess Flora who is set to be her roommate. Even though the Princess is a bit insufferable at the beginning, the better Millie gets to know Flora, the more romance becomes a possibility. Overall: 4

Characters: 4 Millie is super cute. She's excited about senior year in Scotland, and she's ready to leave her tedious friendship circle in Houston. While Scotland isn't full of unicorns and swoony love scenes like she imagined, she finds a genuine love for the place.
Princess Flora has a character to play, and it's her shell against new people and a world that's ready to sell all of her stories to the magazines. She's a bit cold and rude, but, it's easy to see that she has much more depth, even from the start.
They also have wonderful friends, Saks and Perry that help them along and partake in some awesome shenanigans. They're both sweet and also Millie's window into the Royal world as Saks is the daughter of a Duke.
If you did read Prince Charming, you'll get to see some cameos by your favorite characters from that book, but, if you haven't read it, you'll totally understand the story. I'd say you could read the books in either order (I honestly barely remember what happened in the first book because I read it over a year ago).

Plot: 4 I love how this romance is structured. It could be called a hate to love or even a slow burn romance, but it's not annoyingly tropey or even neatly fit into any of the categories. This was the perfect story for me. The first impressions weren't great, a genuine friendship develops, and they're only really together for the very end of the book. I got sold on their chemistry and connection as the book progressed instead of being forced to buy into it from the jump.

Writing: 4 Hawkins has the ability to make the pages just disappear. Her books are the best because it's like a whirlwind and then it's over. Her words are so easy to turn into a movie in your head. I also really appreciate how much effort she put in to creating an entire new modern royal family with the complex detail that makes them as realistic as the real Royals.
My only kind of nitpicky comment I have (only saying it because this is a pet peeve of mine) is that the book starts in/around Houston, where I used to live, and all of the descriptions of the setting struck me as completely wrong. I wish that the starting setting hadn't been specified so that it would have felt more authentic. It caught me off guard to hear the middle of the summer described was "warm" and with a breeze. It's melt you hot, and almost no one spends long periods outside if they can help it.
It's really not an issue, though- really more of a me problem.


Books By This Author...
Prince Charming (or Royals): Review Here