If I'm Being Honest 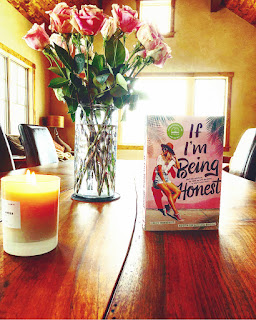 If I'm Being Honest by Emily Wibberley and Austin Siegmund-Broka (April 23) To Buy at Your Local Bookstore (Affiliate Link)
Overview: Inspired by The Taming of The Shrew, Cameron's story starts with her as a mean girl with a sharp tongue and a problem beyond having no filter. She's horrible to everyone yet undeniably popular and surrounded by friends who are just like her at her super expensive LA prep school. But, then, she finds something she wants that she can't have: Andrew. He thinks that she's a "bitch". The word stings, and Cameron decides to make amends with everyone she's wronged to prove him otherwise. She finds that, maybe, she likes being... a decent human being? Overall: 3.8

Characters: 3 There are unlikable female characters that you love because they're strong, confused, or prickly on the outside, and then there's Cameron. I think that in their last book, Never Always Yours, Megan is a prime example of an unlikable character (that I loved). She's outspoken and honest with her sharper traits grounded in her unstable family situation and personal insecurity. There's a definite humanity to cling on to and identify with.
Cameron, on the other hand, is just mean. She says crappy things to people for no reason other than to have a snippy thing to say. She seems to think she can only build herself up by tearing others down. She thinks nothing of her mom, and, ya, she has a poor home life, but we never dig into it enough to justify her behavior. She seems to be the product of a toxic private school social environment where her negative traits are exacerbated. Also, even when she decides to try to be nice, she acts like a robot, totally incapable of empathy. Despite the fact that she started doing better, I wanted to yell "Noooo!" at all the outcasts and misfits who accepted her after she spent three years putting them down. I get that she's based off of Katherine in Shakespeare's play, and I haven't read it, so I can't attest to how close the characters are, but I have watched 10 Things I Hate About You, also based on the play. Kat is empathetic, strong and nonconformist- not hateful to everyone around her.
That being said, there are some good characters and some cardboard ones. Brendan made the book for me. Even though I wish he didn't give Cameron a million and one chances, he's still adorable, kind, sweet, and intelligent. I think he also had an interesting storyline of rediscovering his worth after years of school wide bullying. I wish the revelation didn't come facilitated by his former bully for her own selfish reasons, though. Brad, though he's barely featured, is also a needed bit of humor and the only popular kid I don't despise.
Beyond that, her parents, her prep school friends, and the other background characters are given no arc or time to shine. They seem to exist only as objects for Cameron to complain or make a point about. They're never really seen in action for us to understand or identify with.

Plot: 4 I have a real mix up of feelings about this book. I still don't believe Cameron is a good person, and I don't think that she deserves the good that comes to her, but after about page 200, I started having fun. Her moments of banter with Brendan are gold, and I like seeing her hang out with Paige.
I had a struggle with the beginning, though. Most of it is Cameron being whiney and entitled. She wants a boy (that she tosses aside and barely gets mentioned even though he facilitates the whole plot) she can't have, but she never shows what makes him so great. Then she starts her apology tour to "tame" herself after her English class starts the play. The apology list drives her actions through the rest of the book. Honestly, if I hadn't been reading an ARC, I would have probably DNF'd it 50 pages in.

Writing: 3 I'm not sure what happened. I was so excited for this book because I genuinely loved Never Always Yours for its deep characters and family relationships. The biggest problem with this book is there's almost no action and no dialogue. We only see things happening as Cameron tells us they do, which makes the situations less compelling. It's clear when you're supposed to feel bad for Cameron. I never did, though. There were so many good places for exploration and for genuine change, if it seemed like Cameron ever meant it. The justifications for her behavior were too shallow and poorly illustrated to buy, and it made the book harder to get through.


To Purchase
More By These Authors...
Never Always Yours: Review Here