Fear of Missing Out 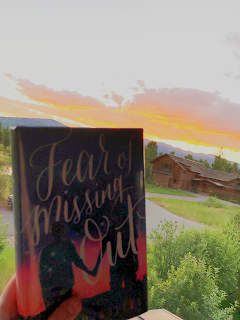 Fear of Missing Out by Kate McGovern
Overview: Astrid has a form of brain cancer called astrocytoma that causes a star shaped tumor to form near her brainstem. Though she was in remission, two years later, the cancer comes back, and Astrid becomes convinced that she won't beat the disease. She starts to pursue options that will allow her to have a life in the future, namely, cryopreservation. After essentially freezing her body, she hopes to wake up when there's a cure for her cancer so she can rejoin the world and see some of the milestones she fears missing.
On the road trip to tour the Arizona facility, though, Astrid makes other realizations about her life and eventual death that alters how she sees her original plan. Overall: 4

Characters: 4 Astrid is relatable. She has a touch of dry, witty humor that makes her relatable. She loves her friends and family deeply, but she also has a conviction to follow what feels best for her. I appreciated how she always tried to stay honest to herself and was open with changing her mind when what she thought she wanted started to feel wrong.
The biggest fixtures in her life are her boyfriend, Mohit, her best friend, Chloe, and her mother. Astrid and Mohit have an interesting relationship that started before she dealt with cancer the first time. It's interesting to see Astrid, who's an atheist, and Mohit, who practices Hinduism, talk about the idea of what happens after death. They're very open to each others ideas and wishes, though there is conflict that Chloe and Mohit feel in allowing Astrid to do what she feels is best and selfishly wanting to keep her longer.
She also has an interesting relationship with her mom as she goes through these second round of treatment feeling like there's no way she'll come out the other side. Her mom, of course, wants to wish the best, which clashes with Astrid's new outlook.

Plot: 4 While the summary in the book heavily focuses on the idea of the road trip, it honestly feels like the most minor part of the story. It is mostly about friend and family dynamics, taking agency, and facing death when you don't feel like there'll be a life after. It's a love story, a friendship story, and a mother daughter story much more than a road trip book.

Writing: 4 The interesting thing about this story is that it doesn't feel like a sad book in tone. The writing is light and almost jovial. It angles more towards the beauty of life than the sadness of a beautiful one coming to an end. It is an interesting take on a terminal illness story, most of which play up the tragedy for dramatics. Even in the saddest parts, there's a peace in knowing that Astrid has control of the thing that is controlling her.
The one thing I do want to note is that there is no author's note about the research that went into the story or signs of research in the acknowledgements or author bio. While the book appeared well done, accurate, and sensitive to me, I can't confidently comment on the accuracy of the story.