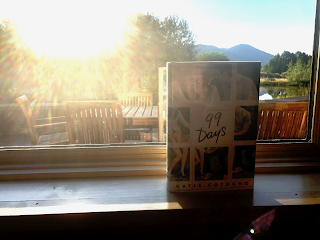 99 Days  by Katie Cotugno
Overview: Molly is back in Star Lake after running in the night in shame. Slut shamed within an inch of her life before she left for senior year at boarding school, the 99 days back home before college are not ones she's looking forward to. With an entire town aware of her love life thanks to her mom's thinly vailed bestseller, this summer proves to be interesting. Overall: 3.5

Characters: 3.5 I have a lot of mixed feelings here, as with the plot. I like a lot of Molly. She's very independent and strong. She's unafraid and after hiding for a little while, she's not afraid to confront things head on. My problem is, while I'm all for messy characters and human choices, there were more than a handful of moments where Molly was a straight up horrible person to the people around her for really no good reason. Reading her justification, I guess I could see it, but it's extremely weak for its costs.
As for the two brothers that make up the other corners of her love triangle, I have major problems with both of them, and, yes, they're human too. But the way they were sort of idolized wiped out the commentary on their negative sides. Patrick, Molly's boyfriend before her life fell apart, seems decently sweet and sensitive from the outside, but, he's controlling and caught up a lot more than he'd like to let on in appearances. His personal issues lead him to be pretty manipulative to Molly. His older brother Gabe, is by all accounts perfect beyond the age gap. It doesn't weird me out with the current timeline of the story, but Gabe's mentions of realizing his attraction to her when she was 12 and he was 14 is just a little weird considering how sharp of a divide those two years bring between kids. Also, I found the one night stand Gabe and Molly had when she was a sophomore and he was a senior a little sketchy especially with some points revealed at the very end of the book. I don't think Gabe ever had any bad intentions, but both boys used and manipulated Molly in their own ways and didn't address it enough.

Plot: 3.5 There's a lot about the plot that drew me in too. I loved the beginning where she starts to build her life around what she wants, not the town's perception. I also really enjoyed the middle where she's gaining confidence at her job and repairing friendships and making new ones. It's the end where it all falls apart. It sort of feels like a slap in the face as a reader because it feels like you've endured this great character growth and learning experience with Molly for her to have gained absolutely nothing.

Writing: 3.5 The thing I liked most about this book was that each chapter is a day. Some describe major events, some are just short, sweet moments. The short chapters helped the pacing immensely. I wasn't the biggest fan of the writing style and found it clunky at times. Overall, it's a cute backlist summer read that's great for reading at the beach or on an airplane.


If You Liked This Book...
Amy & Roger's Epic Detour: Review Here
Save The Date: Review Here