The Year They Fell Review 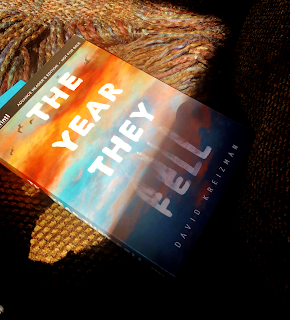 The Year They Fell by David Kreizman
TW: Sexual Assault, Grief, Loss of Parents, Drug Use
Overview: Josie, Jack, Archie, and Harrison all lost their parents. Dayana was supposed to, but her dad forgot his passport, and her parents missed the plane. Nothing was supposed to go wrong. Their parents had left on their fun, annual friend group vacation. When their propeller plane crashes, the former friends have to come together to learn how to mourn. Overall: 4.5

Characters: 5 There are a lot of characters in this book, but they're all well developed and have their own struggles aside from the main line of the book. In a Breakfast Club like fashion, you have the jock, the popular girl, the outcast, the brain, and the loser types. Despite their archetypal origins, they each develop and find their own layers and struggles independent from their stereotype.
Dayana deals with being half in half out of the group, as she has her whole life. When her parents immigrated, she couldn't speak English, and she's cast herself as an outsider ever since. Harrison is fighting for the top spot in his class so he can head to Harvard like the plan says. His loss of his mother struck me the hardest as he was quite emotionally dependent on her. While it was never explicitly stated, it seems Harrison struggles with OCD. Archie is an artist but never has felt like he's fit into his family as he's African American and was adopted into a white family. He struggles with people's perception of him.
Josie and Jack are twins. Josie deals with struggling between a facade and being honest with herself. She also deals with PTSD like symptoms from sexual abuse by a coach in her past. These issues and symptoms are brought to the surface for her again in the wake of her parent's death. Jack is the least developed of all the characters but harbors significant anger of his own.

Plot: 4 If you like a lot of action, this probably isn't the book for you. While they do go on a bit of an adventure towards the end, the story is mostly about friendship and coping with grief. It explores this very well, but, sometimes, some elements felt rushed.

Writing: 4 I love the voices of these characters, and I have to commend David on his ability to tell a story with five different narrators with such clarity and precision. It wasn't difficult to tell whose turn it was to narrate, and each narrator felt necessary and intentional.