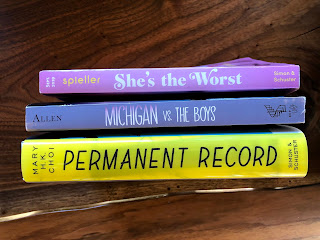 She's The Worst  by Lauren Spieller
Overview: Jenn is about to leave for Stanford. The only problem is that she leaves tomorrow, and she hasn't told anyone in her family that she's not staying in LA. Her parents want her to stay at home and work at their antique store to keep it afloat while they teeter on the brink of divorce. April, on the other hand, has her soccer career taking off with a USC scout interested in her. The only problem is that no one takes her or her soccer serious. In a single wild day, the girls come together to form one last day of memories together before they go their separate ways. Overall: 3.5

Characters: 3 My issues with the characters are about the same as my issues with the entire book. They're given interesting situations, but they really aren't developed beyond a couple empty traits and the problems that are defining their lives. Jenn has hatched a crazy plan to tell her parents at the very last second that she really is going to Stanford even though they said no to that idea a long time ago. She thinks, somehow, that telling them at 9pm before she leaves in the morning will cause them to reflect and find mercy. Basically, she's the golden child and she's acting out by declaring she's going to Stanford.
Then there's April who seems as self absorbed as Jenn but also constantly feels bad about herself because she's the one everyone in the family thinks is useless. This would have been a super interesting element if it'd been explored beyond the fact that she plays high level soccer and everyone thinks it's stupid and that they don't ask her to work in the store cause she's irresponsible.
Their parent's demeanor and expectations could also have been interesting, but all they do is have stupid arguments and expect their children to quit everything important to them to work at their antique store that's only been open a few years. It just felt like everyone was severely lacking motivation.
The only relationship I diid appreciate was between Eric and April. While he was awful to her and a completely flat character, I did like the. glimpses of insight we got from April as she realized that he wasn't a great person, she'd only made him a great person in her head. I wish I'd gotten to see that further developed.

Plot: 3.5 There's aa lot going on here, and, at times, it gets a little chaotic. But, overall, I thought that there were some interesting plot ideas. Because of the lack of character development, I almost felt like the characters and the plot were one and the same. I wish more of the family stuff and the individual conflicts had been taken at a deeper dive. I also wish that the scavenger hunt thing had been more tightly plotted to make the story move a little quicker.

Writing: 3 This is a dual POV book, but, without remembering to read each chapter heading, it was hard to tell whether it was Jenn or April speaking. They had identical voices, and, when I boiled it down, very similar conflicts and flaws. I wish that there'd just been one narrator because not having distinct voices in dual POV is a major reader pet peeve of mine.
Otherwise, there were a lot of fun parts of the book that I did enjoy. If you need a short, light read, then check it out.

Other Books by This Author...
The Destination Is On Your Left: Review Here

Links of Interest:
The Sun Is Also A Star Movie: Here
Into YA with Sonia Hartl: Here
Have a Little Faith In Me: Review Here
Empathy Factor: Here
New Release Wednesday Reading Spotlight New Releases