Who Put This Song On? Review 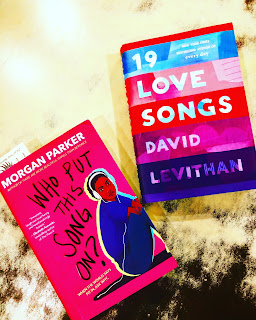 Characters: 5 I love Morgan. Her voice shines through incredibly clear, and she gives a relatable voice to the realities of depression. Her family and friends and their admirable bits and flaws are all well fleshed out. Morgan is one of those narrators who can see lots of different points of view while still being firmly placed in her own reality.
There's a lot of nuance in this book that can be so easily lost. Morgan confronts many aspects of self and her relationship with the world. She's open to interrogation even if she doesn't see much room to change. She also finds a voice to stand up for herself and what she believes in more confidently. Over the course of the book, she ends up confronting her white friends about some of their unintentionally hurtful behavior, and there's a lot of complexity in how those discussions unfold. I also love how Morgan gets more and more confident in challenging the issues her school presents and the history that they're erasing. As she does more research, she gets increasingly empowered. Finding a voice in the midst of that also helps her get more bold in going after the friendships and relationships she becomes interested in as she meets people outside her school bubble.
I also like how much care was taken in the woven narrative about therapy and medication to treat mental illness. It's not a perfect result. She doesn't love her therapist, but she also doesn't hate her. She doesn't know how much it's really changing her life, but she's also a strong advocate for therapy and is willing to give it an honest chance. The medication is about the same. It definitely makes it better, but it's not perfect. She's still not bitter or angry about it. I think this book has a great depiction of dealing with depression and mental illness as a teen from the coping mechanisms to the emotional reality and impact on loved ones. I also like how it doesn't paint any of these treatment actions in a severe light- either unrealistically positive or discouragingly negative.

Plot: 5 This is one of those stories that is very slice of life, which I love. We delve deeply into the culture of Morgan's conservative, Southern Californian small town, her friends, her family, and her personal development. We learn lots of small details that make the story more intimate and real. It's complex and focused on character development and interpersonal relationships.
It's also set in 2008 as Obama is first getting elected to office which I found super interesting. I'm average YA reader age, and I was in kindergarten then. I don't really remember what it was like in 2008, but it was very interesting to take that in from a different perspective. It also made me realize how young I am.
Interestingly, I think that this book is somewhat based on the author's senior year. The author's note goes into it more, and she talks about what happened to the characters she based on people she knows in real life. It's heavily fictionalized, but it's easy to see why the book feels so grounded if it shares common threads with the author's lived experience.

Writing: 5 I enjoyed the writing most. You can tell that before novels Morgan wrote poetry. It's not a verse novel, but there is a sense of poetry in her word choice and the way she builds images. I also like the structure she uses to build the story and character developments. We're on a generally linear storyline, but there are chapter that weave in that explain more of Morgan's history and personality. There are also chapters of email exchanges and notebook entries. I love how dynamic the approach is, and it gives you a more complete idea of Morgan's world view quickly. Some might find the nonlinear chapters disruptive, but, if you're a  fan of that style, you'll love this one.