The (Odd) Process Behind All Our Worst Ideas: A Guest Post by Vicky Skinner 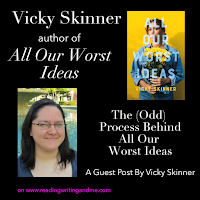 Today, I'm welcoming Vicky Skinner to the blog to celebrate the impending release of her new book All Our Worst Ideas. It's out in the world on August 11th, but today, I want to give you a glimpse into how the novel came to be. If you want to go ahead and preorder your own copy (you can do so here*), Vicky has an awesome preorder incentive making you a playlist, which you can read more about on her Twitter. I hope you enjoy Vicky's story about how her book came to be, and thank you to Vicky for taking the time to write this piece.

I’ve done a lot of odd things while drafting books. I’ve drafted a novel on a cruise ship, drafted one only at libraries, drafted many in the late hours of the night when I was so tired I didn’t even remember what I wrote until I saw it the next morning. But the drafting of All Our Worst Ideas will always be the weirdest idea I ever had, and an idea I’m not likely to replicate in the future.

I got the idea to write All Our Worst Ideas in 2015. I was listening to Ed Sheeran while working at the front desk of a dog grooming salon when I got the idea to write about two teenagers who were complete opposites who work at a record store together. Now, it’s not unusual to get ideas at bad times, like when I’m already in the middle of another project, but this one was awful timing. It was the last week of September, and I was gearing up to participate in NaNoWriMo (National Novel Writing Month) in November, and this was the worst time to decide I was going to draft a new novel, but nevertheless, I decided it had to be done, which meant it had to be done by the end of the October, or I wouldn’t be able to do NaNoWriMo.

Well, this was all bad enough, but earlier in the month, I’d attended a book signing for Neil Gaiman, who I’m a big fan of, and he’d spoken so charmingly about how he writes all of his books longhand first and then transfers them to his computer during editing, and I thought the idea of writing longhand was just unbearably romantic, so I decided I was going to write All Our Worst Ideas on yellow legal sheets, which I guess wasn’t a terrible idea except then I decided to write the book non-linearly, which meant I wasn’t writing it in chronological order, so every time I finished a scene, I had to rip it out of the legal pad and put it in a binder where it fit in the story so that when it came time to type it up, it was all in the correct order.

And that lead to The Binder. And really, The Binder wasn’t the bad part. It was thick as all get out, but it was mostly fine. It wasn’t until I was about a week into the project that I realized if my house burned down while I was at work, my only copy of the manuscript would be gone, so I had to carry it with me to work and everywhere else, which meant I needed a bigger purse. And that’s how I ended up carrying a Betsy Johnson bag that was the size of a small suitcase around with me for the entire month. It was really a joke.

I wrote the entirety of All Our Worst Ideas in the lobby of Snoopy’s Grooming while I answered phones and checked dogs in for their grooming appointments, all while listening to obscure 90s Brit bands on Spotify. I usually paused the music when customers came in, but at one point, a customer who had been in the parking lot for a few minutes before coming in said, “Oh, no. Please. Don’t turn it off. You looked like you were having a good time.”

Drafting All Our Worst Ideas was a complete mess and one of the most stressful experiences to date, but I finished it in three weeks, and now here it is, five years later, being published!


Preorder All Our Worst Ideas*

Links of Interest:
July 2020 Wrap Up
Folklore Book Tag
Felix Ever After
Books I'm Looking Forward To: August
This is an affiliate link through BookShop. BookShop helps support indie bookstores and using my my link allows a small percentage of the sale to support the blog at no extra cost to you.
Guest Posts Reading