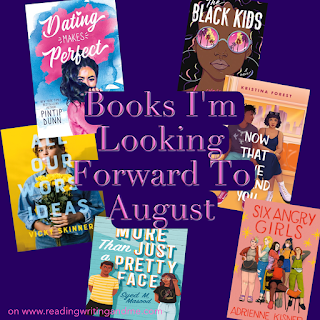 Happy almost August! Can you believe that summer is almost over? It feels like it never even started. One of the fun parts of a new month is a whole host of new books to get excited about. August does not disappoint, especially if you're a romance fan. As I wrote this post, I kept thinking, "These covers are all so gorgeous", and while 2020 is pulling out all the stops in the cover department, I realized that I tend to initially look into a book because the cover catches my eye. Do you judge books by their covers (at least initially) too? Let me know in the comments. Anyway, I hope you're just as excited for these August reads as I am!

The Black Kids
by


Preorder a Copy!
Ashley is trying to enjoy her LA summer in 1992 chilling on the beach with her friends. Her plans take a turn when the police officers who beat Rodney King are acquitted. Protests break out across the city, and, even though Ashley doesn't want to be involved, she's suddenly singled out as the Black kid among her privileged, prep school friends. As her family faces struggles, her sister starts getting involved in the riots, and a dangerous rumor starts spreading, Ashley is forced to decide where she wants to stand.
The cover is so eye-catching, and I feel like it's exploring this period in history from a really interesting lens. For many teens, this event was skipped over in school curriculums, and since we didn't live through it, we don't know a ton about what happened beyond the basics. Hopefully, this book will inspire more people to look into it further and continue learning.

More Than Just a Pretty Face
by


Preorder a Copy!
Danyal is incredibly charming and has a promising career as a chef in front of him. Still, there are a couple problems. His father doesn't approve of his career path, and his crush, Kaval's, family doesn't believe he's a worthy match for marriage. To prove all of them wrong, Danyal signs up for the Renaissance Man academic competition. He's not the most natural fit for the competition, so he asks Bisma to help coach him. Through the training, he starts to realize that maybe he as going after the wrong goals all along.
This sounds like a super sweet romance, and I love any book that revolves around cooking or food. I'll be starting this one soon.

All Our Worst Ideas
by Vicky Skinner
August 11th
Preorder a Copy!
Amy is looking at the perfect end to senior year- graduating valedictorian with her longterm boyfriend, headed for her dream school. That is until it all starts to fall apart. To get her mind off of her old plans, she starts working in a record store where she meets Oliver. While Amy is working on a new plan, Oliver is sure of what he wants but unsure how to share it. He's not planning on going to college. As they get closer, Amy runs the risk of being too stuck in what could have happened to enjoy the present moment.
I was sold the second I heard it was about two teens in a record store. I love music in books as much as I love food. Vicky is also doing a super cool preorder campaign where she'll make you a personalized playlist for a library request or purchase. (You can read more about it here, and I'd love it if you'd consider using my link to preorder. It would really help out a lot). I'm highly anticipating when it arrives at my library!

Adrienne Kisner
August 18th
Preorder a Copy!
Raina is having the perfect senior year until her boyfriend dumps her, her drama club dumps her, and her dream school decides that she's not part of their dream. With nothing left, she turns to the trendy knitting shop in town where she runs into Millie, who is dealing with her own world of problem. Millie is dealing her (what sounds like) abusive father and getting voted out of the mock trial club she helped build by a sexist group of boys. Raina decides that they'll both get back on track by starting their own mock trial team to rival them.
This book sounds feminist and fun and inspiring. I also love that they meet at a knitting shop. Knitting is such an underrated hobby and one I need to get back into.

Pintip Dunn
August 18th
Preorder a Copy!
If you wanted another YA romance with fake dating and enemies to lovers, this one's for you. Winnie isn't allowed to date- until now. After her sisters, who lived with the same rule, refuse to get married during college cause they haven't had enough time to date, Winnie's parents decide that she has to go on heavily supervised practice dates to stop that disaster from repeating itself. The first match? Her childhood best friend turned sworn enemy. What could go wrong?

Now That I've Found You
by


Evie was supposed to be Hollywood's next big thing. Her grandmother was certainly famous enough to make it happen. But after a major mess up, Evie is going to need a PR miracle to get back on track. Grandma Gigi is really the only one left who could save the day. The only problem? Grandma Gigi has gone into hiding and no one knows where she is. Forced to work on a tight deadline, Evie turns to Milo, a musician who was the last person to see Gigi, to help find her. They run all over New York hoping to find her in time.


I'm so excited for this book. It has so many things that I love. It's set in NYC and seems to use the city as a major element, and it has a musician, and it has the twist of revolving around famous people, which is always fascinating. I've had my eyes on this book all summer. There's also a great preorder campaign going on if you're looking to treat yourself to a new book (read more about it here).

Links of Interest
He Must Like You
The Voting Booth
Today, Tonight, Tomorrow
Into YA with Lyla Lee

Coming Up This Month Reading