Felix Ever After YA Book Review 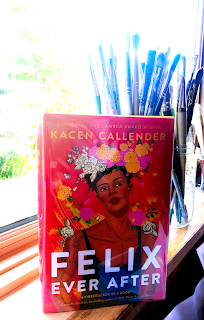 Felix Ever After by Kacen Callender
TW: Transphobia
Get a Copy From My BookShop*

Overview: Felix has never been quite sure where he fits in. Being Black, trans, and queer, he's always wondered if all his identities make him too complicated to love, and the economic differences between him and his peers at his fancy art private school don't help either. Even with his doubts about his identities and his lovability, he still has his best friend, Ezra, and their friend group to lean on. When a transphobic attack outing old pictures of Felix and his deadname happens at school, Felix starts trying to figure out who was behind it and get revenge. That pursuit isn't as straightforward as he thought, and Felix ends up locked in an unexpected love triangle. This is a heartwarming, sweet book about constantly questioning, changing relationships, and learning to love your complete self. Overall: 5

Characters: 5 Felix is impossible to not love. He's sarcastic and hilarious in some moments and utterly sweet and sincere in others. I think any teen (or person, really) can relate to his constant questioning of whether he's made the right choice. He doubts whether he actually wants to go to Brown (a goal he's been working towards for years) or college at all. He wonders about his art and whether it's good enough. He wonders whether he's lovable because of all the flaws he sees and because his mother left his family when he was young. Most of all, Felix questions his gender identity. After starting testosterone and getting top surgery, he feels much better. Most days he feels unquestionably like a guy, but others, he's not sure. He knows he's not a girl, but he spends a lot of the book exploring what the other options are out there, discovering different nonbinary identities, and trying to decide what feels right for him through support groups and the internet.
All of these questions unfold so organically over the course of the book and leaves the reader with the message that it's okay to re-evaluate your past wants or decisions. It doesn't mean you were wrong, but you might find something more right. Whether that's with your own identities, relationships, or something like picking your future path towards college or not, you don't have to live and die by what you decided months or years ago. I think that's such an important message for everyone, regardless of what they're going through, because so often we're held to only getting one choice.
Felix's parents also play a roll in the book. His mom left a long time ago to build a "better" family in Florida. She won't even answer his emails. Of course, that leaves him full of self doubt. His dad tries to provide the best life he can for Felix, even when it's hard and money is tight. He's helped Felix with the steps to physically transition and tries to offer his love and support. That makes it more confusing when he uses the wrong pronouns or Felix's dead name. It found it very compelling to watch Felix try to reconcile that in his head and also process the idea of if he's allowed to be angry at his dad for that stuff because he's funded and enabled so much of his transition. Monetary support always ends up being messy, and I liked that Kacen fully dived into their relationship.
Then there's Ezra, Felix's best friend and school support system. Ezra is wildly protective of Felix and is always there to listen or let Felix stay over when he doesn't want to stay with his dad all the way in Harlem. The friendship they have is super honest and genuine and also natural. I really loved seeing that unfold.

Plot: 5 This is a slice of life type contemporary with a lot going on. There are generally three sub-plots. 1) Uncovering the transphobic troll attacking Felix, 2) The love triangle, and 3) Felix's identity questions. They all get resolved in a very satisfying manner, and each one is engaging enough on its own to make you want to keep reading. The question of who was behind the attacks will definitely keep you guessing, and there are a ton of false leads. The love triangle was really fascinating and well handled (and I'm not usually a love triangle person). Also, it gives you a taste of both friends-lovers and enemies-lovers.
The emotionally charged nature of the book means that all the scenes move quickly, and you can't wait to read the next one.

Writing: 5 It's the writing that really makes the book. Kacen is truly gifted with words. The descriptions of New York City burst off the page, surround you, and fully transports you. It's easy to live in Felix's mind  and see the world through his eyes. Even his less than smart ideas are still understandable.
I was also impressed that every minor character has a very distinctive world view. Over the course of the book, Felix has very supportive allies and also deals with a lot of transphobia.  Even among LGBTQIA people, Felix struggles with acceptance on many levels. They each have their own view on what is right and acceptable. He even face many different types and reasons for the transphobia. The book really digs through the issues and fighting and pain inflicted even among community members, which isn't discussed enough. It was very eye opening, compelling, and heart-wrenching to read about. My heart hurt for Felix a lot, but the book never really hit a lingeringly sad note. It was so open and exploratory, and seeing where Felix ends up is so triumphant.
There's also a very interesting conversation about labels and whether we need them. The discussion was so nuanced and carried through many different points in the story. I thought it was such a valuable part of the book.
Everyone in the book community is buzzing about this book for a reason. Even if you're nervous about reading hyped books, give Felix a try. I doubt you'll be disappointed.

Get a Copy of Felix Ever After from my BookShop

Links of Interest:
Books I'm Looking Forward To: August
He Must Like You
The Voting Booth
Today, Tonight Tomorrow

This BookShop link is an affiliate link which means I get a small commission on any purchases made through them. If you're planning to get a copy of this book, it would mean a lot to me if you'd use it. This helps support the blog and keeps it running.
LGBTQ Reading Spotlight New Releases Standout Book Weekly Reviews and Recommendations