All Our Worst Ideas YA Book Review 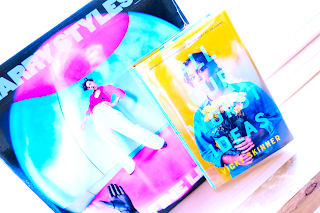 All Our Worst Ideas by Vicky Skinner

Overview: Amy has her life all laid out. She's going to be valedictorian, get the Keller Scholarship, and go to Stanford. Easy. Oliver doesn't quite know where he's headed yet. Taking his gap year has just confirmed that he doesn't want to go to college. No one in his life knows that yet. Amy and Oliver are thrust together when Amy gets a job at Spirits, the record store where Oliver works. They both live and breathe music, and that connects them even though their lives couldn't be more different. Amy and Oliver are a true example of the power of music to unite people. Overall: 4.5

Characters: 5 I loved Amy and Oliver. I related to Amy so much. She loves music and uses it to get her through her intense academics and the heavy expectations from her family. She feels pressure to do well that mostly comes from herself, and her drive keeps her pushing to win valedictorian. While everyone knows how smart Amy is, her mom always talks about her Stanford plans with doubt. Her life gets far messier when a new job and a social life starts to come into the picture, and it forces her to decide what's actually important at the end of the day.

Oliver is so, so sweet. He's careful and sensitive. He also knows what he wants out of his life, but at the start of the book, he's too scared of what his parents will think of his plan to try to own a record store. He loves his job working with Brooke, and Spirits feels like his home. He also has the intense responsibility of caring for his alcoholic father. I love the way that Oliver was portrayed and the reminder that college isn't the only option if you want to be successful. There aren't enough characters that show that in YA, and I really appreciate the relationship between Amy, who is the highest of high achievers, and Oliver, who has a just as worthy alternative plan, is so balanced. They look at each other with so much mutual respect and admiration.

Plot: 4 This is a pretty classic romance. They meet at the record store, slowly fall in love, things get complicated by school and Amy's ex. All seems lost and then there's the glorious reconciliation moment. I don't think that's a spoiler considering Swoon Reads only publishes romances, and all romances have a happily ever after. The plot moves pretty quickly because of the short, alternating chapters. You get a nice amount of subplot about their families to get to know Amy and Oliver as individuals, but their scenes together are the most fun.

Writing: 4 As I mentioned above, the book is broken down by months and within the months, Amy and Oliver trade narration every couple pages. If those quick changes aren't your thing, this probably isn't the book for you. I think it helps the pacing a lot. I love all the music woven into the book and that a lot of it takes place at a record store. There are so many music references that Vicky has complied them into a list at the end. Overall, this is a super cute, relatable story.

More From The Author...

Guest Post by Vicky Skinner: How The Book Got Started

Which Is Better? Apple Music vs Spotify

They Wish They Were Us Adaption and Halsey Acting

The Summer of Everything