Clap When You Land: YA Book Review 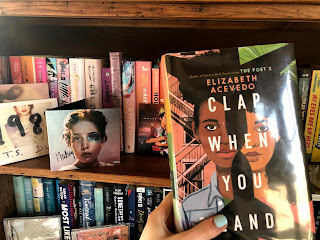 Clap When You Land by Elizabeth Acevedo

Overview: Camino and Yahaira are sisters, but they don't know it yet. Camino's dad spends most of the year in NYC making money to send back to the Dominican Republic. Yaharia's father always spent the summers away doing business in the Dominican Republic. They don't know that when their dad is gone, he's really visiting the other daughter until his plane crashes into the Atlantic Ocean. The aftermath and grieving process bring them together. While the grief and loss leaves a giant hole, it also opens new possibilities. Overall: 4

Characters: 5 Yahaira and Camino are both super relatable. Their voices are so similar yet distinct, and you can see how growing up in two different cultures, yet still heavily influenced by each other, developed their points of view. Camino has a lot of assumptions about her American sister, assuming their rich and that she's spoiled. She sees them, at times, as villains who kept her from the states or who will try to steal inheritance money from her. Yahaira doesn't know what to think about having a sister. She has more hope in expanding her family and finding parts of her father in someone else, but she also knows how much pain Camino's existence (and her father's secret second marriage) brought to her mother. I love how Acevedo built their worlds out and how she let them each waffle between trust and mistrust. The building of the extended family and the island was also great and contributed a lot to the story.

Plot: 4 The story is a nonstop rollercoaster of grief. It starts with them separately getting the news about the plane crash and their immediate grief in the wake. You learn about Camino's best friend who has her baby prematurely but can't go to the doctor. You learn about the man that stalks her on the beach and presumptively wants to sell her into the sex trade on the island. You hear about Yahaira's mother shutting down amid the grief and how she'd already lost faith in her father long ago. Then they discover each other. There's a relief in finding a new family member to stand in the place of the one who was lost, but there's also a specific feeling of sadness that surrounds how he has two daughters, the exact same age, who live in two different worlds. Later, not to spoil it, there are more big questions that have a bittersweet tinge.

Writing: 4 The novel is told in verse which has feelings of both poetry and vignettes to me. Each page tells its own little snatch of story or captures a certain emotion. There are formatting choices that utilize poetry's use of word art as well and add drama and intension. While I really only read verse novels from Elizabeth (I'd argue she's the most popular YA author using the format), I always enjoy diving into one. I can't imagine telling such an expansive story in so few words, but she does it beautifully. It really is a portrait of grief and childhood disillusionment.

I also love that verse novels flow so quickly. I finished the book in two days, both because there aren't a ton of words on each page, but also because I couldn't put it down. I was totally captivated by the story and taken to a different place. I highly recommend, especially to break out of a reading slump.

With The First On High

Now That I've Found You Review

*This link goes to BookShop and is an affiliate link, which means that I might get a small commission if you purchase at no cost to you. This is a great way to support authors, indie bookstores, and the blog!