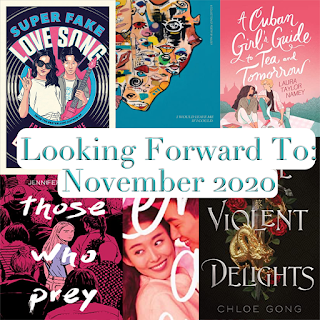 Sorry I've been gone so much this month! It's hard to keep up my regular reading schedule with school. The last two weeks, I've been dealing with midterms and finals for different classes, so there's been plenty of extra work. I'm working on getting back to reading so I can share some more reviews with you very soon, but I should be back to regular posting this week.
Since it's almost a new month, I figured it's a good time to get excited about the brand new books that are coming in November and get some last minute preordering done to support these books!
This month is a little bit different because I'm including a broader range of titles. I have a couple I've preordered already, some suggested to me on Twitter, a fantasy book I'm considering reading, and a book of poetry that I have wanted for months and months. I can't believe Halsey's book is finally out. In each book feature, there's a preorder button you can click to preorder these books from Bookshop, which is a great way to support indie bookstores around the country. These are affiliate links which means that your purchase not only gets you the book and supports bookstores but supports the blog because I get a small commission at no cost to you. Please consider using these links or shopping my storefront here.

Chloe Wang needs to present a better eligible bachelor to her strict parents. Hongbo, who is the wealthiest young bachelor in their small Asian American community, has already offered Chloe a proposal, so she needs to act fast. That's where Rent for your 'Rents comes into play. The boyfriend rental service designed to impress strict parents sends her Drew Chan. While Drew is not parent quality in real life (a college drop out with a passion for art), he's great at playing the role. And in this mess, Drew and Chloe start to fall in love. Chloe has to sort out which parts of her life are most important before it's too late.

I have been excited about this book from the second it was announced. I'm a huge fan of Gloria's books and have been since American Panda. Her writing style is always captivating, and I love that she tells older YA stories. Rent a Boyfriend is college aged YA. This one is on my personal preorder list.

Emily is disappointed about college. She didn't find her people right away and has felt completely lonely. Then she discovers the exclusive on campus group called The Kingdom where she finally finds a sense of belonging. The only problem is that the group has a dark side that comes to life on a mission trip where the group gets effectively kidnapped as an initiation ritual. Then someone ends up dead. This one is described as a psychological thriller and has been comped to Sadie.

This book wasn't one that I personally had a close eye on, but it was recommended to me through Twitter. I like that it's another instance of college YA because I'll always be excited to promote those books. Maybe I'll check it out after someone tells me if I'll be able to sleep nightmare free when it's over. The description reminds me a bit of They Wish They Were Us.

A Cuban Girl's Guide to Tea and Tomorrow

As usual, a life is about to get turned upside down. Lila was going to take over the bakery from her grandmother after graduation, move in with her best friend, and live happily ever after with her boyfriend. After her mental health starts to deteriorate, her parents decide she should go stay in England with family friends to decompress and recenter. While she's originally angry about that choice and hates England, she starts to love England through the eyes of tea shop owner Orion. Maybe she doesn't want to return to that perfectly planned life after all...

I'm noticing most of the books on this list range older, even the ones, like this one, that were recommended to me for this list instead of just focused on my own preorder list. Honestly, I'm excited about it. So much of YA is firmly focused on 16-17 that there's not much for people leaving high school and entering college to cling to, because my reading taste is very much still YA in voice. And, while I could read about senior year forever, it's cool to see characters with my concerns. That said, we also need more 14-15 YA protagonists, but can't we have both?

Sunny is a nerd. He has a major crush on cool girl Cirrus. When she sees Sunny's older brother Gray's bedroom full of electric guitars and band paraphernalia, she assumes the room is Sunny's and he must be in a band. Not wanting to disappoint, Sunny casts himself as the front-man of an imaginary rock band. He forces his friends to help materialize a band, and Cirrus asks see them play. Quickly, he becomes popular and Cirrus starts dating him. He has that high school life everyone imagines based on movies. Of course, this is bound to fall apart, but it's nice while it lasts. Sunny wonders how long he can be this person everyone likes before his authentic self has to come out.

I know David Yoon from Frankly in Love, and I almost missed he has a new book coming out! This one is far more geared to my personal taste, so I'm super excited. I feel like the way that Frankly was made out to be a fake dating love story did it a disservice. It was a great, super close contemporary that built a world view super well, but I think a lot of people felt like they didn't get the story they were sold. I'm kinda pleased to go into this one with far fewer expectations than before.

In the 1920s in Shanghai, there are two rival gangs. Juliette is a former flapper and now the leader of the Scarlet Gang, which she has inherited. They've been locked in a power struggle with the White Flowers for generations. Juliette's equal on the other side is Roma, who she used to date. He was her first heartbreak. This is intense as it is, but then the city starts to fall apart, fall ill, and die. It becomes quickly apparent that Juliette and Roma will have to put their differences aside to save the city.

This is a historical/fantasy type book which is usually the last thing I'm into, but I'm intrigued here. I haven't read fantasy in 3 years, but I think I might break that for These Violent Delights. I follow Chloe on twitter, and I love getting to support fellow Gen Z authors. Also, this whole book sounds like Halsey's Hopeless Fountain Kingdom album and music videos in a book, and I'm always excited about something with those vibes.

I Would Leave Me If I Could

Speaking of Halsey, she has a book of her own coming out this month! I have been waiting for this book since Halsey announced it, and I'm still wondering if she ever sleeps with how many new things she's always rolling out. Given that Halsey's lyrics are so spectacular, I can't wait to see what she does with her poetry. It seems like this book has been a long time in the making. Halsey has talked about its vulnerability, but we don't know a ton about it. There has been one poem released as part of a Budweiser that gave me chills. I'll include that below. The Goodreads description mentions themes of failed relationship, family, sexuality, and mental illness, which all feels accurate to what Halsey shares in her music. She's also narrating the audiobook, which is exciting.
Links Of Interest:
They Wish They Were Us
Grown
This Is All Your Fault Blog Tour
Swimming Lessons
Coming Up This Month Music New Release Wednesday Poetry Reading