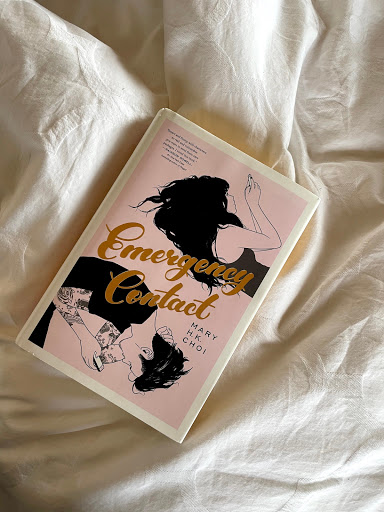 Before I started this review, I wanted to preface it because I'm trying out a different review style. I read Emergency Contact back in 2018 when I first got the book from TeenBook Con, and I immediately fell in love with it. It was one of those books that I knew I was going to love from the second I laid eyes on the cover (which is still one of my all time favorites), and I was right. I've recommended this book nonstop for three years straight, so I decided that I should read it again to make sure I still loved it. Also, 2021 has not been a great reading year, so after a couple DNFs, I decided to go right back to my comfort zone. I'm usually not a fan of rereading, but I actually had a great time.

For these reread reviews, I'm writing them in a more open format since I've already reviewed them in my usual style of characters, plot, and writing. I'll be giving them a new starred review and linking the original post about the book. But my goal for these new reviews is highlighting how my feelings have changed (or not) and favorite quotes and moments. So without further ado...

I thought this would be an interesting book to start with because it's set during Penny's freshman year of college at UT. When I originally read the book, I was just starting my high school experience. I used Penny's story as a glimpse into what college, a place I couldn't wait to get to, might be like. Now I'm in my second semester of my freshman year of college, so I'm experiencing the book next to Penny instead of looking up to her. Unsurprisingly, I relate to her now more than ever. We're almost the same person. It's a little scary sometimes.

I still love Penny with all of my heart. She's anxious and always calculating what the next disaster might be. She never fails to consider every detail. She's lonely, but she's also picky about who she wants to befriend (something I majorly struggle with). Mostly, she feels like no one ever entirely gets her and doesn't understand why people would want to spend time with her. Until Sam. They're wearing exactly the same outfit when they meet, and that isn't the only thing they have in common. While Penny is an overly organized anxious, Sam takes his panic attacks with a side of drifting through life. He's less together than Penny is, but they vibrate on the same frequencies. They relate over being creative people (Penny's a writer and Sam wants to make documentaries) who are stuck. They both feel like they'll never feel centered or secure in what's happening in their lives. I loved seeing them both begin to tackle the projects they were afraid of, encouraged by each other's enthusiasm.

Texting becomes the perfect medium for them to quietly confide in one another. It's a little more distant. It's also more constant. Penny and Sam text the same way I do. They give me hope that I might find someone who understands my frequency like that one day. It's a YA love arch that feels accessible and possible. It's everything, with its emotions and complexity and the way they twist my heart, but it's still realistic.

Following that train of thought, I'm still so happy that there's a book out there that validates the power on online relationships. Though Penny and Sam meet IRL first, the vast majority of the time they spend getting to know one another happens via text. They get to know each other on an incredibly deep level through the little message bubbles, and it feels extremely validating to see reflected in a book. All of my friendships now unfold in message bubbles, and people are so quick to dismiss the power of those relationships.

My last major thought on this book, besides how incredibly seen it made me feel, is that I'm surprised this book is YA. There have been a handful of books with college protagonists and 21 year old love interests over the last few years (see also Rent a Boyfriend), but this book honestly feels like it's in a category of its own. The book definitely has more of a YA voice, but it deals with a different set of challenges than the typical YA book. If NA was a thing, this would be NA, and I think it's an incredibly powerful argument for expanding NA. Penny deals with some typical growing up issues, but she's firm in her identity throughout the book. She's not learning who she is. Instead, she's expanding her definitions of friendship, she's learning what it's like to be on her own, and she's dealing with an incredibly complex family situation in a different way than most YA arcs. She no longer lives with her mom, but she still has to navigate the built up resentment. Mostly, she's reconciling feelings that she was never cared for enough as a child- that she always had to be an adult. That low grade anger propels much of the book, and I feel like it's a super typical realization for a college age situation. Also, Sam is 21. I feel like that seriously pushes the upper edge of YA. Half of his conflict is thinking his ex-girlfriend is pregnant and having a crisis over the possibility of being a father, which again feels very adult book. I love this book and relate to it a lot, but I don't think it belongs with stories about sophomore year of high school. I enjoyed it as a younger high schooler, but particularly, reading it now, it just doesn't feel like YA to me. It's exactly what needs to exist between YA and adult, though, and I hope there are even more books like it in the years to come. Giving them a proper category would go a long way in connecting the book to the right readers who need the story most and to legitimize stories about that time of life.

I'm so happy to say, I endorse Emergency Contact just as much, if not more, than I did before.

"Penny never looked the way she thought she did in her head, like how your recorded voice sounds positively vile when you hear it out loud" (207)

"It was about to write, and his theory was that in art you had to shape experiences so that what you wrote was exciting- to the point where the mundane seemed magical and extraordinary. You had to make people feel something even if you were staring at a rock"

"'What kind of question is that? It's fucking art, man,' he said, scowling. 'You don't choose it. It chooses you. If you waste that chance, your talent dies. That's when you die along with it.'"

"Loving someone was traumatizing. You never knew what would happen to them out there in the world. Everything precious was also valuable"

More From This Author: