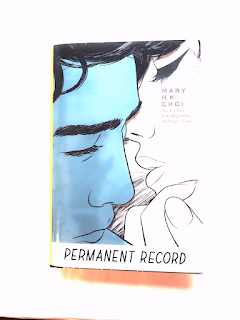 Permanent Record by Mary HK Choi
Overview: Pablo's life is a mess. He works at a bodega or a "health food store" depending on who you ask, which is about the only thing he has going right at the moment. He dropped out of NYU, though that debt still follows him, along with the credit card bills from some ill advised buying sprees. He has a good group of friends that he lives with and a family that genuinely does love him, but he has no clue what he's doing. What's the end goal? Who knows... Overall: 5

General Thoughts: This is not a normal part of my reviews, but I had some things I wanted to say that don't necessarily fit anywhere else. 1) I love this book, but I feel like it's for a very particular set of readers. You MUST be a lover of character driven stories because a lot of this book is exploring Pablo's mind. I love that. I honestly don't care about plot if I love your characters, but I know a lot of people aren't like that, so fair warning. 2) I would like Mary's ability to title books because Emergency Contact and Permanent Record are some of my favorite titles of all time. 3) This cover is just beyond gorgeous and the plastic dust jacket and what it does with the art is just remarkable. Anyway, on to the review.

Characters: 5 I was not expecting Pablo when I picked up this book, but I love him now. He's really the book. All of his anxieties, confusion with life, and passion for seemingly useless things fuel the book. While he has nothing figured out life wise, he's miles ahead of most in the emotional intelligence department. He's totally a 20 year old dude but he's so aware of his feelings and the world around him. I want to be friends with Pablo.
The other remarkable thing about this book is how well it balances a huge ensemble cast beautifully. This means I can't get into everyone here, but each character is so effortlessly developed from his million roommates to his whole family to his found family at the bodega. It adds to the feeling of being fully part of more than a story but a world.
I will mention Leanne Smart briefly because she's named in the flap copy. Honestly, she's not as big of a part of the story as a lot of people. The book isn't about dating a famous girl like it might seem, but I'm happier for how it turned out. I also like the different and evolving looks at Lee we get through Pablo's eyes as time goes on.

Plot: 5 Like I said, a lot of the book is in Pablo's mind living in the anxiety, rehashing how he got to where he is. I love it. The book deals with things I feel like we need more of in YA but I've never seen before. It deals a lot with fear of failure and the meaning of success and talent. Reading about Pab's experience at NYU spoke to some of my deepest fears. I think Pab is all of us who are growing up in a world that expects you to describe, have a plan, and stick to a box for everything. What if you want to do everything? I also love all the family stuff in this book. It's so real! Also, all the stuff about debt is a huge realty today and a good warning for teens becoming an adult. There are so many things that no one ever tells you about adulting it seems.

Writing; 5 I loved Choi's writing before, but this was next level. Like I mentioned above on the feeling like you're part of a whole world, the language she uses to write this book feels so New York. Not in a cheesy stupid way but totally effortlessly. It feels authentic in voice, in the story. I can't wait to see where her writing goes next, and I love that she's paving the way for more 18-20 something stories in YA.

Links of Interest:
She's The Worst: Review Here
The Sun Is Also A Star Movie Review: Here
Into YA with Sonia Hartl: Here
Have a Little Faith In Me: Review Here