As Many Nows As I Can Get 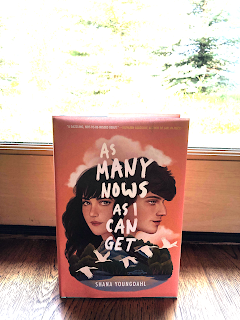 As Many Nows As I Can Get by Shana Youngdahl
TW: Drug use/abuse
Overview: The last year of Scarlett's life has been a whirlwind. Ever since the summer after high school, Scarlett has been spiraling everywhere. Though most of her friends are too. She made it into MIT, but she picked going to Maine to get the scholarship money. And when she gets to college, she learns that she's facing a much more difficult situation. Faced with messy relationships left behind in Graceville and a reality she never thought she'd encounter so soon- a positive pregnancy test- Scarlett is lost and faces an uncertain future that doesn't make sense. Overall: 4.5

Characters: 4 Scarlett is an amazing character. She's so alive and vibrant. She makes her very specific, chaotic reality feel accessible and immediate. With a plot that feels like the drama has been layered and layered, Scarlett and her way of viewing the world grounds the story spectacularly.
Then there's the shifting cast of characters as we move through senior year and freshman year of college in Scarlett's life.
In high school, we meet Rage, Hannah, David, and Cody. All of these people (well, aside from Rage) play a role in shaping who she becomes and how she faces the challenges she's presented when she's all alone. Hannah, her conservative Christian yet party happy friend, ways in her mind even when they're no longer sharing every part of their lives with each other.
Then there's Cody and David who were the loves of Scarlett's life so far. Cody was Scarlett's first love, though the relationship was mostly dissolved by the time we start looking in at her life. He broke her heart for the first time. David was there to put it back together and break it again. David was electric. He was there when Cody abandoned her. He's wild and pulls Scarlett out of her regularly patterned life running her nonprofit and becoming valedictorian. He's so... different even though they've known each other their whole lives. He's the golden boy, he's going to Stanford, but he also has a drug problem that everyone would rather ignore. Everyone else is fine. David is not.
And, when Scarlett needs David most, he's gone, not responding to any of her texts. He's the one whole gets her best, but it doesn't matter anymore.
Instead, in college, it's her roommate Mina that's left to pick up the pieces of her confusion and regret and later her complicated feelings around her pregnancy. Despite barely knowing her, Mina is a ride or die friend.

Plot: 4 This plot is a lot. Honestly, at around the 200 page mark it felt like the whole story had been told. We'd been through the senior year whirlwind with the romance that fell solidly in the grey area, full of genuine love and passion but also the kind of electricity that leaves a burn. You can feel Scarlett's ache at its absence. It feels like a lost great love story, and it is complete in that form.
And then you learn Scarlett is pregnant. Not to spoil anything, but it's pretty clear from the moment the topic is introduced, Scarlett wants to go the adoption route. It's something I completely wasn't expecting. It's also something I've never seen in a YA book. While the story is extremely well done, it seemed a tad over the top with the already very strong grieving narrative.

Writing: 5 It's Shana's writing that makes the book so special. She's so good at articulating emotion  beautifully and the way she ties in Scarlett and David's love of physics and biology is adds a metaphorical quality. I'm looking forward to whatever she writes next.
The story is also told out of order which had the potential to go off the rails, but made the story even more beautiful.

I'll be posting an interview with Shana on Friday, so come back for that to get a deeper look into the book!