A Pho Love Story by Loan Le: YA Book Review 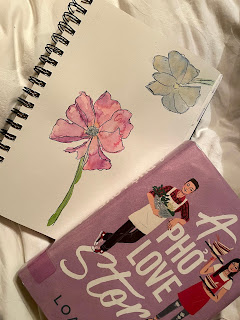 Overview: Cue up "Love Story (Taylor's Version)" because this book centers around a Romeo + Juliet like relationship- only this time the feud is based in rival pho restaurants across the street from one another. When Bao and Linh have a chance encounter, they start realizing the child of the "enemy" is actually... nice? As they get to know each other better, Bad finds a passion for the first time through writing and Linh gains confidence in her art. They bond over their shared life experience, both having Vietnamese parents who ran parallel restaurants. Over time, they unearth the painful past the feud is built upon, and both families have to reckon with the past to move on in the present. Overall: 4

Characters: 4 In the book, Linh and Bao are both POV characters in the book. Bao is clearly so kind hearted from the beginning. He's very empathetic and careful. He starts the book feeling quite lost. He doesn't know what he wants to do with his life, and online Linh's parents, Bao's parents just want him to find something to be his thing. Through accidentally ending up in the journalism class, Bao realizes his hidden passion for writing. This was a great story arc, but it felt like his writing came out of nowhere. I'm a writer, and even though I didn't really take it seriously till 6th grade when a teacher told me I was actually good at it, I always liked writing. I have distinct memories of adoring poetry in 2nd grade. Bao seems to totally stumble into this passion and all the sudden it just works and he's good at it even though he's barely written anything? I just wish that there had been a few more steps in this story.

On the other hand, Linh is an amazing painter, and she's always been an artist. She has a clear view of how she wants to live her life, even though she knows it's hard to have a career in the arts. Her parents are convinced she should be an engineer, though, and they've never taken her art seriously even though she's the best in her class. Linh feels like she can't be honest with her parents about her passion and her goals which leads to a deep rift between them, made even worse by her secret relationship with Bao. Linh has to figure out how to find her voice and muster the confidence to proudly own her ambitions in life. I deeply identified with Linh and her story. It was extremely well done, and I love how much her family was incorporated into her storyline in such a holistic way.

Linh and Bao each have a best friend that play a role in the story, and both their parents are heavily featured. I don't have much to say about any of these characters because most of them, especially the friends, simply exist in the context of what they need to do for Linh and Bao, so it's hard to get super invested or have much of a comment on them.

Plot: 4 The pacing in the book isn't the best. I loved the story in the beginning, and it's quite detailed. I was able to immerse myself in the world, but I really struggled through the last third of the book. I was ready to be done reading that book, and it felt like it just continually lagged at the end. I actually skimmed and read like every fifth page of the last twenty or thirty pages. I wish the story had a bit more urgency. There were strong plot points, but they were muddled by extremely long, detailed passages that made it difficult to carry the excitement of those major moments. I loved the sections when they were going on restaurant reviews, but the story began to lag as those wrapped up.

Writing: 4 I like Le's writing style, and she told quite the compelling story. I got swept away in the details of restaurant life and the roles that both of the teens played in their family restaurants. That side of the story was well developed and wonderful. I feel like some plot points and some of Bao's characterization could've been stronger, but I still enjoyed those points overall. I feel like there were just some details that were included that didn't need to be there and some details that were missing that were confusing. Also, this is more a copy writing detail, I guess, but there's a shortage of speaker tags in some places or where a character is speaking over multiple paragraphs with tons of closed quotation sets that confused me about who was speaking at what time. I had to reread some passages multiple times. If you don't like denser writing, this probably isn't the book for you, but if you love to soak up every second, you'll probably enjoy this one a lot. I think it maybe could've used one fewer subplot and a bit more aggressive pacing style.

More on The Blog:

As Far As You'll Take Me Review