Only Mostly Devastated by Sophie Gonzales: YA Book Review 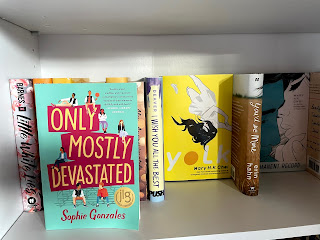 Only Mostly Devastated by Sophie Gonzales

Overview: Will and Ollie have a magical summer at the lake in North Carolina. The summer is where their budding romance ends, though, because Ollie lives in California. To his surprise, though, at the end of the summer, Ollie's parents announce they'll be staying in North Carolina to help his Aunt Linda who has cancer. Ollie is shocked to discover that Will actually goes to his new school too. The only problem? Will's not out yet, and he doesn't seem to be headed down that path any time soon. Ollie is continually confused by Will's confusion over whether he wants to pick up where they left off at the lake, and navigating their sorta-maybe-kinda relationship proves to be a lot when he also has to learn a new school, find friends, and babysit his little cousins every day after school. While the move was the last thing Ollie wanted, there's a chance it could be for the best. Overall: 5

Characters: 5 I immediately clicked with Ollie. Like Darcy in Sophie's sophomore novel, Perfect on Paper, Ollie is extremely witty and sarcastic and smart. He's exactly the kind of person I want to hang out with for ten days straight. He has the perfect mix of cynicism and romanticism, and he's good at seeing situations for what they are. Ollie has been out for a while, and though he gets teased plenty at his new school, he's good at brushing it off. He's navigating a lot of change at once, but he's good at compartmentalizing all of it. I was surprised at how much his exploration of his own grief and the grief of those around him later in the book effected me, but we had extremely similar thought processes, and he made me feel very seen. I also liked how in his complication relationship with Will, Ollie was able to recognize that even though Will didn't mean to hurt him, he could still be treating him in a way that isn't acceptable.

Will is not as confident in his identity. His friends make constant gay jokes, and he's not sure if he'll be accepted by his parents. His fear of being out, though, does lead him to treat Ollie horribly- leading him on and then dumping him to the curb whenever he gets scared. Will's main arc rests on him grappling with that and handling it better sometimes than others. You can tell Will has a good heart, but he's a prime example of how teenagers can be so crappy without meaning to be.

This book actually has quite a full world of fleshed out characters. Will and Ollie's friends naturally blend because Will's basketball teammates happen to have crushes on the girls Ollie is friends with. Juliette is a gifted clarinet player who is driven to get into conservatory (MINI SPOILER: she doesn't ultimately succeed in this and has to brainstorm a back-up plan towards what she wants which I think is so important to show in stories about senior year). Nimah wants to become a model and is having success with it. She deals with a lot of stigma over being plus sized and wanting to pursue that career path, and she also leads a super candid (and important!) conversation about the realities of living with PCOS. Finally, there's Lara who, like Will, is on a journey based in getting conformable with her sexuality. She bottles a lot of her confusion into hostility, and I thought her friendship that evolves with Ollie was really great to see since they don't get started on the best foot. Both Will and Lara are bi, and seeing the other's parallel story seems to help a lot.

Finally, there's Ollie's family. We don't get to know his parents or his uncle very well, but he spends plenty of time babysitting his cousins and helping Aunt Linda. This part of the book dealt very heavily in grief, loving someone who you know you will lose, and how different people grieve. Aunt Linda is very important to Ollie and has always been a big supporter of him. The kids both have very distinct personalities, and it shows a lot about Ollie how carefully he cares for them. I was not expecting this element of the story from the way that it was pitched, so definite warning about that. You definitely have to be in the right place to approach this book.

Plot: 5 I was totally engaged through the entire story. Having so many plot lines running at once made Ollie's world feel like it could be walked through and completely explored. Sophie did a great job of balancing all of these threads and making them intermingle in important ways. There's a little bit of everything going on, and it felt so realistic to what it was like to be a teenager in 2019.

One thing that Sophie does extremely well is that she fleshes out every single character so much you genuinely care about them the right amounts for the plot to truly effect you. She made Will treat Ollie horribly at times but made his confusion come through so much that you never stopped caring about Will or started hoping they wouldn't work out. We get to know Aunt Linda and her family well in a short period of time so we're invested in what happens there. I did cry towards the end of the book briefly. There wasn't a point of time that I lost interest, which is honestly rare these days with how much I have going on.

I also wanted to say that I love how Sophie wrapped up the story with where everyone was going to college or planning on doing next. Even if they were brief mentions, she showed plans working out and plans not quite working. She gave examples of characters getting what they thought they wanted and changing their minds. It's okay to make your plan B your plan A. It felt extremely realistic to what I experienced and what a lot of my friends went through, and that's honestly rare in YA, so I wanted to shout it out.

Writing: 5 I love Sophie's voice. It's one of the strongest I've seen in YA. I didn't originally pick this one up because all the promo I'd seen around it talked about it being like Grease or almost like a Grease retelling, and I could not stand Grease, so I just avoided it. A few months ago, I read Perfect on Paper because it's summary basically summed up my dream book and it did end up being my dream book. Since this was out in paperback, I figured I'd give it a try. I'm so glad I got over my initial hesitation. Her writing is truly fantastic, and the way she handles plot and characters is unmatched. I also love how her books always capture a range of queer identities and talk about the nuance of them and different experiences under the umbrella of being LGBTQIA. I love seeing such full ensemble casts that all learn from and support each other. If you've liked one of her books, I highly recommend you pick up the others because you won't be disappointed. Sophie is definitely one of my auto-buy authors now.

Into YA with Sophie Gonzales

Counting Down With You

It's Kind of A Cheesy Love Story