Off the Record by Camryn Garrett: YA Book Review 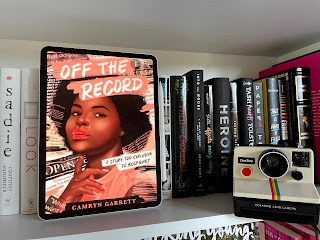 Off the Record by Camryn Garrett

Thank you to the publisher for sending me an ARC of this book so I could share my honest thoughts with all of you.

Overview: Josie has been working on her journalism career since she was 15. At 17, she's won a contest to write a cover story about a budding movie star for one of the most popular magazines in the country. On the press tour, though, she befriends one of the young actresses and learns that one of Hollywood's most popular director has been harassing and assaulting women on set for years. Josie feels like she has to do something with this information, but even as an accomplished teenager, she's still scared her age will hold her back from getting their voices heard. Overall: 4.5

Characters: 4 Josie is a great main character. We get to fully live in her head as she experiences this whirlwind press tour. We learn about her self-driven writing career, her anxiety, and her back and forth feelings about her body. All of these are written so realistically to what it's like to grow up as a teen right now. Josie has a major Twitter presence and has anxieties around that as well. I think so much of this comes from the author being a member of Gen Z and closer to her main character's age than most authors writing YA. I love how Josie has built a career already around something she loves, and I related to how she struggles with not getting taken seriously by adults and also that same fear of not being taken seriously.

On the tour, we spend the most time with Marius, the dashing, young movie star, Penny, the former Disney actress fighting to be taken seriously, and Alice, Josie's older sister and chaperone. Alice and Josie are quintessential sisters. They fight plenty, but they genuinely care for each other on a super deep level. While Alice sometimes says hurtful things to Josie, they work through it well. Penny at first seems like she clashes with Penny, but they come to form a really beautiful friendship and understanding. Marius is mysterious, even though Josie speaks to him most for the profile on him. You never quite know what Marius's motives or feelings are, and there are many twists and turns in the story based on this.

Plot: 4 The two main plot lines in this book revolve around the development of the article to expose the director Roy Lennox and Josie's time interviewing Marius for the profile and eventually falling for him. I really preferred the path where Josie gets to know Penny and goes about gathering stories to expose this horrible man. It's awful and gut wrenching, but it's wonderful to watch Josie and Penny team up to reclaim the power from Lennox. I also just love the development of their friendship through the book.

I wish Marius had just stayed a friend as well. The power dynamic in the story felt really awkward to me. Josie is 17 and a young journalist, but mostly a high school student. Marius is 19, would be in college, and is a rising actor who's set to sweep award season. I just didn't feel like it was super ethical for him to indulge Josie's crush on him, especially because she fell so hard for him. Also, I don't feel like Josie should've pursued the relationship because she was working on a piece about Marius as a job. The whole situation just felt awkward and imbalanced and generally unnecessary. I feel like we don't get a lot of books just about friendship in YA, and I wish that the book had leaned into that angle more. The love story didn't really take away from the reading experience, but I was constantly questioning it.

Writing: 5 Just like with Camryn's other book, I loved the writing. It's so easy to read and extremely vivid. The plot moves quickly and balances the serious, the fun, and the behind the scenes of the movie industry in a super satisfying way. She weighs the heart of the story and the allure of the high concept well. I truly could not put this one down, and I would highly recommend it to everyone.

More on the Blog:

Olivia Rodrigo's Sour As YA Books