Some Girls Do by Jennifer Dugan: YA Book Review 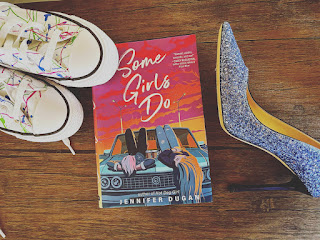 Some Girls Do by Jennifer Dugan

Overview: Morgan is starting over well into the second semester of her senior year. She had a college commitment to a D1 school and everything was working out. Then her Catholic school decided to take everything away from Morgan for liking girls. This launched a lawsuit, a move-in with her brother 3 hours away, and completely starting over with track and college being a huge question mark. Ruby is a lifer in the town, and Morgan is an inconvenience. Ruby just wants to work on cars and endure the parents her mom makes her attend. She does not have time to crush on the new girl who may or may not be confirming her hunch that she may or may not be bi. Not that anyone can ever know that. While Morgan and Ruby have plenty to deal with as individuals, they can't seem to stop crossing each other's paths. Overall: 5

Characters: 5 The characters in this book are so vibrant. We get to read from both Ruby and Morgan's points of view, which makes the book so much stronger. Morgan is headstrong and always on fire. Because she grew up going to a super homophobic Catholic school, she's decided it's her mission in life to have pride everywhere she goes now. As her family sues her old school for discrimination, she's desperate to make a mark on her new school and prove something to herself in a way. She's talented on the field and naturally outspoken. You can tell right away that Morgan is a force, and when she's coming in your direction, you get out of the way. But you can tell that she's patching over her own insecurities. She has a solid support system between her brother (who does an adorable job of attempting to parent) and her actual parents who stay super involved despite the distance. Morgan's storyline of learning how much privilege she has to even be in a position where she can be out, even when it's hard, is a really powerful one, and one I don't see often in books.

Ruby doesn't have a cheer squad of supportive family and queer friends. She hardly has much of a family. Her mom has guilted her into a life of pageantry to make up for ending her mom's pageant career when she got pregnant at 16. Her mom has never treated her well and is super homophobic, and the latest new boyfriend is just scary. She sorta has Tyler, the lacrosse player she often hooks up with, but they hardly know each other because Ruby is terrified of strings, boundaries, and loving things. The only good adult in her life is Billy, her mom's ex-husband. He runs a garage in town and supports Ruby's passion of restoring old cars. He's the support system she desperately needs but isn't sure how to accept. Ruby hates labels and boundaries, both in relationships and when it comes to her own sexuality, and most of her conflict with Morgan comes from that complete clash of Morgan's certainty with Ruby's uncertainty. Ruby's story is an important counter balance to Morgan's more magazine cover type journey, and I really fell in love with watching Ruby's path throughout the book.

Plot: 5 If you like slow burn romances, this book is for you. Also enemies to lovers. This book really has it all. I loved how much of Morgan and Ruby's lives we got to see of them as individuals and there was a serious amount of pining going on so that it felt totally earned when they finally got together. I also feel like knowing both characters away from each other makes their experiences as a couple so much richer. I never wanted to put the book down, and I was totally engaged the entire time.

Writing: 5 Jennifer Dugan's writing just gets better with every single new book she releases. I absolutely loved Verona Comics, and I loved this one even more. From the first chapter, I was immediately like "this is so incredible". Like reading this book made me immediately start thinking about how I could be a better writer, and I don't usually have that impulse while reading.

Jennifer even managed to make me get super invested in a plot point I usually hate. I typically find it super annoying when one person won't commit to a relationship but won't walk away from it either. But I'm starting to realize that's because the story is almost always told from the person who wants commitment who has an easy time dismissing what might be holding the other person back. My heart went out to Ruby so much as I read. Morgan really struggled to look outside of her own point of view, and she only viewed Ruby in the context of what Ruby could do or was to her. Their relationship was so complex, and I liked that we were allowed to delve into that so much.