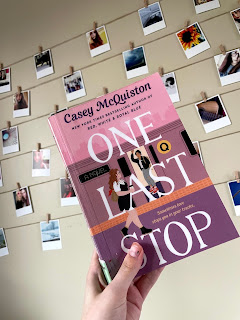 One Last Stop by Casey McQuiston

Overview: August moved to New York for yet another fresh start and hopefully to finish out college (finally). In her attempt to find a place, she stumbles into an apartment full of interesting people who will quickly become her best friends. They fold her seamlessly into their lives. And then, on the subway, August meets a girl who will change her life forever. As time goes on, August finds out that Subway Girl, or Jane, is stuck on the Q metro line by some kind of energetic force. With the Q shutting down for maintenance by the end of the summer, August and her friends have to band together to get Jane unstuck, even if that means bouncing her back to 1977 where she came from and never seeing her again. Overall: 4

Characters: 5 I genuinely loved everyone in this book, and they gave me such warm, fuzzy, and hopeful feelings. The book would be New Adult if that was a category that publishing actually used (please can we make this more of a thing with college and just out of college aged characters). The characters are all 24/25 and at varying stages of figuring out what being an adult means to them.

August grew up in New Orleans with a mom who was obsessed with solving the disappearance case of her older brother, Augie. The case had been cold a long time, and her mom is the only one still looking for answers. August's young life became defined by Augie's disappearance. And while August is good at being an investigator and enjoys flexing that muscle, she resents what her mother's obsession took from her childhood. She's been chasing a fresh start ever since she became and adult, but without firm roots anywhere or an idea of what she wants for her future, college has been a useless exercise for her. New York teaches August that it's okay to be permanent, to love and be loved, and that it's safe to start dreaming.

In the apartment August rents a room in, she meets Myla, Wes, and Niko along with Isiah who lives down the hall. Myla is a Columbia graduate who doesn't want to use her engineering degree for a typical corporate job. She's a sculptor and works at the local electronics shop. She's gifted with wires and electricity and also knows quite a bit about the multiverse theory. Wes is a former trust fund kid disowned by his parents when he refused to keep going to college. Now, he's a tattoo artist, using his skills for art he enjoys instead of architecture. Wes is closed off and secretive but clearly has a really great heart. Niko is a psychic and does a lot to make August realize things about herself, less because of his powers and more from how observant he is. Niko and August's relationship is really nurturing. Finally, Isiah finishes out her New York family as an accountant by day and drag queen by night. Isiah, despite not being much older than August, becomes almost a parental figure to her.

Finally, there's Jane. Ripped jeans, a leather jacket, and a cassette tape that mysteriously runs without batteries, she's always exactly the same and always there every time August steps onto the Q. Once August discovers that Jane is trapped there, she involves her friends in trying to set her free. That requires helping Jane remember who she was in the 70s before she flashed into August's present day. Through many, many subway rides, they fall in love. Jane's predicament and the uncertainty of what would happen, even if she succeeds, makes them reconcile with the idea of if you love something, you have to let it go.

Plot: 3 I'm really really glad I didn't DNF this book, even though I usually would have. I think I stuck with it because Casey McQuiston is such a popular author now. Even though I didn't love Red, White, and Royal Blue, it was cute. This book is not nearly as fast paced as their first novel. It's a totally different vibe. It's slower and far more in its feels (which I honestly prefer). Its biggest problem is the first 100 pages. There's a lot of repeated, monotonous life, and it takes about that long for August to find out Jane is stuck on the train and decide to do something about that. Once the ball stops rolling, it never stops. I didn't want to put the book down again, and I was impressed with how so many storylines that seemed unrelated at the start crisscrossed by the ending. There weren't any questions or loose ends at the conclusion. I wish it hadn't taken me a week to get past the first 100 or so pages, but I'm glad I did get to the later section of the book cause I think this was a story I really needed right now.

Writing: 4 Like I said in the plot section, One Last Stop does have an issue with dragging in places. It's very dense in a way I can't put my finger on. Mary HK Choi is famous for writing books where "nothing happens" and the minute details are the point. They're not fast paced, but I fly through them. They feel like water running through your hands. This book felt a bit confused. The plot was fascinating, wild, and action packed, but the writing itself moved like molasses. It's definitely a personal preference on what kind of writing style you click with, but even when I was most invested, I just couldn't fly through this one. I would read a couple pages and take a break and come back to it, even though I finished the last 300 pages in 2 days. I don't think that the super long chapters helped that issue either.

I loved that every chapter started with a missed connection, Instagram post, or article that somehow referenced Jane moving through time. I think it better established all the lives she'd been living than having Jane tell tons of stories, and I love books that have little extras that aren't straight up prose writing.

I think what really gets me about this book and why I have such positive feelings for it on the whole is the found family aspect. People talk about loving that trope, but I never put a ton of thought into it. There were books where characters were really good friends and supported each other, but this truly felt like a family. I'm getting ready to move out on my own to a city where I don't know anyone. It's exciting, but it's also extremely scary. I needed to watch August find her people and create a new life for herself as a reminder that I will find my own found family one day. I also think that your early 20s are a time in your life that are rarely captured in books outside of literary stories that can feel stuffy and disconnected. I got the chance to live with August and walk around in the life she was figuring out, and it gave me a confidence for my own future.

Off the Record Review

purchase links in this post are affiliate links which means the blog makes a small commission on the sale at no extra cost to you when you purchase the book through this link to bookshop.org.