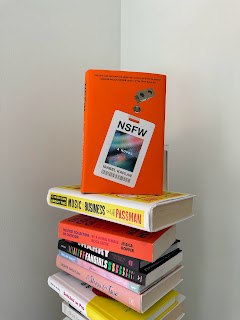 Overview: The protagonist of Isabel's Kaplan's novel doesn't have a name. We can ignore the fact that this unnamed girl has lived a suspiciously similar life to Kaplan, working in television and graduating from Harvard. Nonetheless, unnamed girl is back in LA from Boston and ready to break into the entertainment industry. While she often complains about having all the wrong kinds of privilege, her mother is able to get her a position temping at a television network because of her connection to the head of a company through her law career. She starts at the bottom, but a square one that was created for her. As time goes on, she realizes why TV is an infamously rough industry, and she faces multiple instances of both sexism and sexual harassment leading up to the big reveal that the head of her company–yeah, that guy–is a serial sexual harassment/assault perpetrator. Her mother's connections to the events that follow cause a reckoning in the main character's personal and professional life. Overall: 2.5

Characters: 3 I really struggle to like this protagonist. I totally get having a downer personality or complaining about awful work hierarchies, but this protagonist doesn't give you much room to sympathize or empathize with her as a reader. She rejects her incredibly sweet boyfriend cause he's too boring. She's constantly upset that her parents are rich (but not quite enough) and connected (but not to the right people to fully coast ahead). At the same time, she's terrified that people will think she didn't earn her spot at the company. Her mother is awful, despite painting herself as a saint, but her character is so flat and overblown at the same time that it's hard to fully even invest in her mother's highs and lows she gets drug through. The main character struggles to give you a reason to care. I started to question if I even wanted her to succeed.

Her character growth is also questionable. When her mother decides to defend the network head despite being a prominent advocate for victims of sexual assault throughout her career, the protagonist is forced to reckon with realizing her mother isn't who she thought she was. While she's upset with her mother, her righteous frustration is dulled by the fact that her main preoccupation during the entire end of the novel is the fact that her promotion gets cancelled because the network head was the one giving it to her in the first place, and now the optics around his case and her mother are too bad to go through with it. She just comes off as flat, selfish, and boring.

Plot: 2 Everything is just so blatant, black and white, and out of nowhere. Each plot point jumps out of the blue in a way that isn't fun as a reader. It's just confusing when things constantly come out of left field and then are left almost entirely unprocessed. There was no connective tissue between these moments to make them hit. It ends up reading like a check list of bullet points for potential a plot. She Said, the nonfiction book about bringing the news about Weinstein to light that shares much of a plot with this book is much better constructed if you want to read a book on the subject.

Writing: 3 I wanted to like this book so much. I was sold by the opening line, "The thing about Los Angeles is that it's awful and I hate it, but when I'm there, nowhere else exists, and I can't imagine leaving." That's the best line in the book. The entire introductory chapter is pretty good, but it only starts to decline from there. The voice gets left behind and even the main character starts to feel flat, confusing, and contradictory in a way that seemed entirely unintentional. It grew increasingly difficult to hang on to getting through the whole book. The only thing that kept me going was my need to know how the author would choose to end her confusingly meandering novel. I so, so, so wanted to love a book about a young woman working in entertainment in Los Angeles, but if that's what you're looking for, don't read this. Also, please take the trigger warnings to heart. The descriptions of a number of incidents are quite graphic and really jump out of nowhere. Even the conversations about sexual assault between the main character and her mother were quite jarring while reading and felt a bit gratuitous in the blatant graphicness, and I feel like it's important to offer fair warning about that. I've read many other books that handle sexual assault, and I promise there are many, many books that handle the topic with care better than Kaplan's. I'd just skip this one.