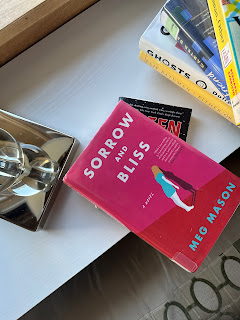 Sorrow and Bliss by Meg Mason

Overview: Martha is unhappy a lot of the time. Nothing's quite worked out right. Her career is a nonevent. She doesn't want to have children. She's often on the outs with her family, except her sister, but she's preoccupied with lots of kids to raise. Martha has been married twice, neither time happily. At 40, she's feeling lost on what she has to show for her life and what she'll do next. Overall: 3

Characters: 3 The characters are all much more developed and compelling in the first half of the book. Really, everything about this book was better in the first half. Despite it moving through time in a nonlinear fashion, the Martha portrayed at the beginning of the book feels like an entirely different character than by the end of the story, and not in a good way.

The auxiliary characters are developed well and add much needed context and clarity to the story. Martha's extended family play a large role, and it was really lovely to see how her perspective on each family member evolved and changed as she grew up and saw the world through different lenses. They're all developed with much more logical nuance than Martha herself eventually gets.

Plot: 3 Again, it's hard to review this book because it feels like two different books jammed together. The first half is wonderful as it provides vignettes throughout Martha's life to give us an enriching portrait of how she's become this forty year old person heading towards her second divorce. While not a plot heavy book, the events of life are pulled apart and reconstructed to bring forward a narrative tension where you can see how the dots connect on a larger scale that's thrilling. We learn about her bad first marriage, her time in Paris, her teenage struggles with the first signs of depression and her relationship with her father, and the elaborate Christmases she'd spend with family through the years. It was highly impressive.

Unfortunately, the second half of the book loses this artful narrative wielding and simply becomes a confusing snarl. As Martha gets older, her mental illness gets worse and heavily impacts all of her relationships. This is introduced in the first half in a way that feels natural to the story. Another element is that Martha is adamant that she doesn't want children. In the second half, it's revealed (spoiler) that Martha has been bitter this whole time because she deeply wants children but thinks she's not a good enough person to be a mother, betraying what had appeared to be a genuine choice to not want children. I did not appreciate this plot twist as it felt disingenuous to what was set up in the first half.

What irritated me more was that the final quarter of the book revolved around Martha finally receiving a definitive diagnosis from a psychiatrist she trusts. What that diagnosis is has been removed from the book. I believe they're alluding to bipolar disorder, but when it's named in the book, it's simply referred to as –– which further compounds the direct and unchallenged stigma that is heaped on the diagnosis. Martha becomes obsessed with what it means that she has ––– and it consumes her. I can't figure out why they wouldn't print the name of the diagnosis since the book clearly set out to tackle a story of a struggle with mental illness. It just felt like an ignorant handling of the topic and really rubbed me the wrong way, and it was additionally not honest to the story as I experienced it in the beginning.

There was a disclaimer at the back of the book that essentially said it did not accurately portray mental illness and that it's all purely fictional which struck me as strange. Perhaps a legal disclaimer, it almost felt like it was admitting that the story faltered in its mission. While every book shows a fictionalized and specific experience, there are many books with mental illness that do bring realism, research, and sensitivity to the table, and I've never seen them carry such notices.

Writing: 3 The writing of the first half was masterful with interplayed stories that spanned for a few pages mixed with paragraph long glimpses to other points of the timeline. That's so hard to pull off effectively and it was lovely. And largely through this book, on a sentence level, it is an interesting read. It's just unfortunate that it completely lost the plot by the end, and I'm still baffled by the removal of a diagnosis that is referenced by "name" ceaselessly. I just don't understand how this so quickly went wrong after beginning on 5 star footing.