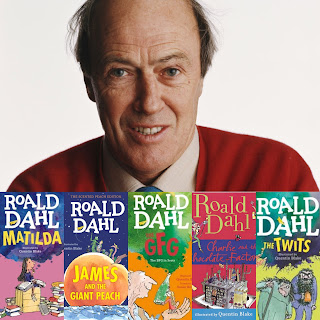 There are few authors who are no longer with us that have maintained both relevancy and joyful readership like Roald Dahl. Like Harry Potter, even if you've never picked up one of his books, you at least know a few of his stories; though very few children graduate from childhood without having read one. While his books have always carried some controversial qualities, there's a reason so many of his books have been children's (and adult) favorite since his first books were published 1940s.

Dahl understood the most important ingredient in long lasting children's literature- appealing to adults as well. Children love story time, an activity that is guided by their parents or teachers. To have a book read aloud, the person reading has to get some amount of joy from it. By not being afraid of witty wordplay and advanced words, Dahl bridged the gap between parents and children. He wrote more about kids and less at or for kids which gave him an undeniable authenticity in his prose.

His work proved another thing about his character- he remembered being a child. Because of this, he was able to play off of the unique situations children find themselves in every day that have faded from the adult mind. Like a child, he uses physicality to build personality. Though not always true, children see the ugly as the immoral and the tall, towering as powerful. Repeatedly, his books tackle when adults abuse their places. By giving his quiet, child protagonists both larger than life and realistic monsters to slay, he touches on what children want most, empowerment and control of their situation, all while putting on a technicolor, imagination-sparking show. Behind they're layers of awe and humor, there are themes to make you think and question a world that could inspire these charictatures.

Though not every adult is the villain. In what I think is his most thought provoking novel, Charlie and the Chocolate Factory, Wanka is an unfortunate hero in the story. He's a man troubled by an emptiness he can't fulfill, and the factory is an expectation he can't live up to. Where Charlie triumphs is over the poverty crushing his family and helping Wanka see past the grader he's come to see as a fulfilling life. As an older reader of Dahl, I realize just how much nuance went into every fantastic world, and I better understand what made me check out Charlie and the Chocolate Factory so often it was practically mine.

Both packed with plot and witty writing, books like Charlie and the Chocolate Factory, James and the Giant Peach, The BFG,  and Matilda have captured hearts and minds for generations. Put on both the stage and screen, his attention to plot and world building are further showcased. Despite the numerous questions about who the man behind the stories really was, he's sparked the minds of young inventors and storytellers on the hunt for a meal in a stick of chewing gum and the telekinesis that might be lying dormant in their heads.