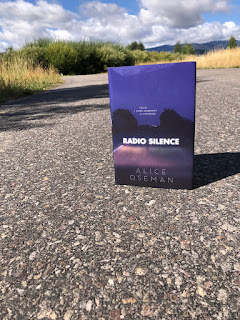 Radio Silence by Alice Oseman (496 pages)
Overview: Frances has always known her across the street neighbor Aled Last in the periphery. He was Carry Last's sister until she disappeared. Now he's head boy Daniel's best friend. When she and Aled are thrust together on a drunken train ride home, Frances learns she's a lot closer to Aled than she thought. He's the mysterious creator of her favorite narrative podcast, Universe City. But when his identity surfaces on the internet in connection to Universe City, it all starts to fall apart for their friendship, and  Aled's life. Overall: 5

Character: 5 Frances, Aled, and Daniel are all extremely real people. France lives her life caught up on the dream of getting into Cambridge. If it's not helping her admissions prospects, she's not doing it- unless it's under a pen name and involving Universe City fan art. Over the course of the book, she realizes that the Frances in her head that she projects and the France that lives inside are two very different people. Aled carries a similar story arch, though his comes more from dividing the Aled he's been groomed to be by his abusive mother and the Aled that tries to shine through in outlets like Universe City. The friendship between the two made my heart hurt a little bit because I so want a friendship like theirs.
The supporting characters are also awesome. Daniel's relationships with his admission to university, Frances, and Aled are all deep and complex. My favorite character, actually, is Frances's mom who is hilarious, ever supportive, and so understanding and wonderful to Frances and her friends.

Plot: 5 This is a long book and a lot happens. As you would expect with a book that's almost 500 pages. Like Fangirl, the pages are used to show the realities of life. Through having both Frances, and a year older Aled, we're able to look into both the senior year jitters and last minute self discovery, and the freshman fears of heading off the university with a shaky identity.

Writing: 5 This book gets a lot of big things right. First, it's a loooong book, but I never felt burdened by it like I sometimes do. I credit that to the fast chapters. After a few pages, you get a sense of accomplishment of finishing a chapter. Further, the chapters were put in sections, dividing out the timeline of the book.
The other stunning thing with this novel is how we get to really stare into the soul of each of the characters even though it's told through first person. In a way, Aled is the protagonist of the novel. Everything is propelled by him even though Frances had wants and dreams of her own. The balance in this book makes it stand out from others on the shelf.