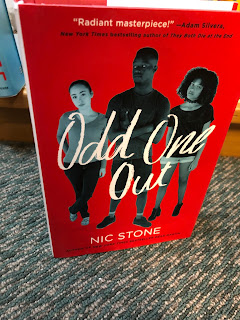 Odd One Out by Nic Stone (309 pages)
Overview: Courtney knows he's straight. The only problem is that he's in love with his lesbian best friend, Jupiter. While he tries to come to terms with the fact that he and Jupiter will never be a thing, he keeps wondering if there's a hope as Jupiter has always acted flirtatiously with him, and they spend many nights cuddled in the same bed. Then new girl Rae moves to town, and it's clear that both Courtney and Jupiter both want to date her. They're also both terrified of losing each other if Rae becomes either one's significant other. Even though Rae starts out thinking she's straight, Jupiter makes her question everything she's believed. Overall: 3

Characters: 3 Courtney would be a super interesting character if he ever did more than moan and grown about Jupiter. He's on the cheerleading squad in the basketball off season, and he's grown up with Jupiter's dads as his father figures since his died in a car crash when he was very little. In the few moments he's interacting with his other friends, I could see why Stone wanted to write about Courtney, but, sadly, those were only glimmers.
I liked Rae a lot more before she picked up being the POV character in Part 2. She goes from being endearing and slightly mysterious to a self obsessed person who sticks as many SAT words into her speech as possible in a way someone with an actually large vocabulary never would. Her pension for SAT words suddenly becomes her only feature which is sad because her original story of realizing she's confused about her sexuality could have been the most compelling story in the book.
I feel like I never really got to know Jupiter. She's loud and outspoken both as a feminist and a member of the LGBTQ community. It's clear from the start, though, that she uses her noise level and labels as a shield against really digging into herself.

Plot: 2 The biggest problem in the book is that there's literally no plot. There's a half hearted occasionally mentioned thread of mystery over a missing child's TV performer that you mostly forget about until it gets mentioned about every fifty pages. Each teen's journey of self discovery can't even pull together a plot thread. The first hundred pages is Courtney aggressively whining about how he'll never be with Jupiter and the two of them repeating the same unhealthy patterns over and over. Then the same thing basically happens in the next two transitions in POV. Nothing new really happens, and none of them truly confront their struggles.

Writing: 4 I was into the first fifty pages. I wasn't sure where Stone was going with it, but I had faith. Dear Martin had such a strong plot, and Courtney had a similar voice. Stone's writing for Courtney felt so immersive, I was willing to follow the character rambling to a point, but, to a degree, it almost felt like Courtney honestly felt like it was wrong for Jupiter to be gay because it meant that he couldn't "have" her which rubbed me the wrong way. All of the characters eventually folded into being overly "written"- truly just characters and not plausibly people. It just felt unnatural, and Stone not really confronting the issues she posed was unsatisfying. Also, the age spread between Courtney (18), Jupiter (16/17), and Rae (15) was a little troubling especially considering that Courtney and Rae contemplate a relationship throughout the book. The main issue is that Stone is unable to delicately weave all of the sensitive topics she raises in her new book.