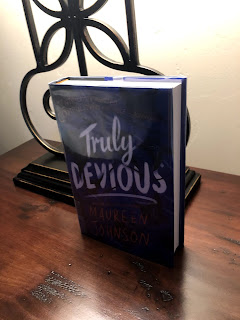 Truly Devious by Maureen Johnson (420 pages)
Overview: There was a murder in 1936. Not just a murder, but a kidnapping and a double homicide. One victim was a student at the elite boarding school on a mountain, Ellingham Academy. One was the wife of the school's illustrious billionaire founder, Albert Ellingham. The second kidnapping victim who is still missing is his daughter. Despite the cold case and the lingering fear of the Truly Devious who sent a poem foretelling the murder a few days before, the school continued to attract the best and the brightest with the allure of a free, prestigious boarding school.
Stevie's dream is realized when she gets accepted to pursue a criminology curriculum tailored to her because her main case of interest took place on the very grounds she's moving to. Though her original mission was to solve the Ellingham cold case, when a student mysteriously dies on campus, her attention is shifted. Did Truly Devious strike again? Overall: 4

Characters: 4 Ellingham Academy is host to quite an eccentric cast of students. Stevie is a singularly focused girl always looking for new mysteries or clues to gather. She's observant and has a family she's trying to escape, but she never really stood out in my mind. While she served her purpose, she never became more than that. Unfortunately, that's what most of the kids amounted to. They were interesting enough, but there was no special intrigue. Except for Nate. He's crafted as the aloof writer struggling with writers block, and it's easy to see the Maureen was channeling all of her writer frustrations into him which gave him a sense of life (and relatability) that the others lacked.

Plot: 4 The story is a duel narrative with scenes from Albert Ellingham's life from around the time of the murder interlaced with Stevie's present day story. While I don't normally love flashbacks, the Ellingham scenes were some of the most successful of the book. With that said, it spaced out the beats of Stevie's story to the point when I wondered when major things were going to start happening. There was definitely elements that compelled me forward, but I can't put my finger on what it was.

Writing: 4 Before I dive into this part, I do want to note that this book is a "To be continued..." because I was totally shocked when I saw that at the end. If I'd read the back of the book, I would have picked up on the fact that it said series (the second book in the duology comes out late January). That fact shifted my feelings on the book more toward the negative.
If Johnson had rapped up both mysteries with some kind of satisfying ending, I would have found the book more successful. Instead, I feel like I didn't really get anywhere in the 420 pages I read. Really, it was just a whole lot of backstory that wasn't filled with the landmines needed for me to get really invested in it. In a way, the book felt passive. While I would have been pleased with this book as a standalone, I probably won't pick up the sequel- both because I'm horrible at following through with series that aren't completed yet and the fact that I don't really feel compelled to learn what happens.