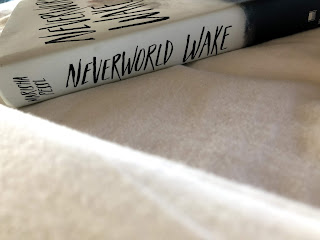 Neverworld Wake by Marisha Pessl (327 pages)
Overview: When Beatrice goes back to Wincroft to meet up with her four former best friends for the first time since their sixth member, and her boyfriend's death, something nearly unexplainable happens. They wake up from a car accident to find that they're repeating the same day over and over. At first, they struggle to understand their fate, but after a few wakes, they realize that they must use this time to discover what really happened when Jim died if they ever want to break the wake. The answer to the question will reveal who will get the groups unanimous vote to be the lone survivor of the Neverworld. Overall: 4

Characters: 4 Each character was interesting with their own quirks and distinct personalities. They filled out to requisition parts of any good, dynamic group. It's unfortunate that each of these characters didn't really have a huge chance to be explored. The setting of the Neverworld was the main character in the story. While I love that the setting and atmosphere was such a major player in the story, it overshadowed relationship elements that could have been developed more.

Plot: 4 Like with the characters, establishing the Neverworld dominated the plot as well. The whole first part of the book dealt with the repetition of the Neverworld. Over and over, they do basically the same thing or they just preform little tests to try the boundaries of the new world. While a few chapters might have been fine, these sections dominated the beginning and end of the book and forced me to start skimming.
The middle kept me going though. I loved watching the mystery unfold. Watching the group discover each other's secrets, as well as Jim's, was so much fun. Jim actually wound up being the most developed group member. The thriller/mystery part of the book is on point.

Writing: 4 Watch out for unreliable narrators. The storytelling in the book is interesting, and I loved the foundation that was laid. I just with Pessl had played in the world more instead of continuing the world building long after the reader has gained an understanding of the situation. While there's a thrill to the book, it's certainly more dedicated to the science-fiction atmosphere than solving a murder.


Links of Interest:
Top Reads of 2018: Here
The Foreseeable Future: Review Here
Eliza and Her Monsters: Review Here
What I Want To See More of In YA:  Here
New Release Wednesday Reading Weekly Reviews and Recommendations