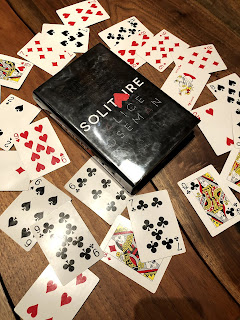 Solitaire by Alice Oseman (357 pages)
Overview: Tori Spring hates everything. And she doesn't think that's an exaggeration. Well, she might like films, but not that much. While she just wants to get through school, cutting class and waiting in the computer room for the day to be over, scrolling through blogs. That's until she follows a trail of Post-its where she finds a website, solitaire.uk.co and Micheal Holden. When the allusive Solitaire's pranks around school become increasingly dangerous, Micheal and Tori set out to find out who's behind it. Overall: 4

Characters: 4 Oseman has a knack for capturing people as people. Tori is depressed. She tries to isolate herself, pulling away from her old best friend, who just feels stale, and resisting friendship with Micheal. She both recognizes this as a problem and justifies it away as just her pessimistic personality.
Micheal recognizes these tendencies in Tori and reaches out to her. He understands how their steps forward in the relationship are always followed by her pulling away. Even though it makes him angry, Micheal always lets her come back because he knows what it's like to hate yourself and feel hopeless. Being together, though, makes them feel better about themselves and accept that they can be desired despite being bullied and left out by their peers.
There's also a wonderful sibling relationship as Tori helps her brother, Charlie, through his recovery from an eating disorder and self harm. They can each empathize with each other's challenges more than their own. Charlie also has a strong, productive relationship with his boyfriend, Nick, who supports both the Springs.

Plot: 4 While Solitaire's pranks and havoc, as well as their unmasking, is billed as the main plot, it is really about how relationships morph and change as well as how these connections shape how we think of themselves. Being different from the popular status quo and not accepted by society puts doubts in both Micheal and Tori's minds about whether they're even worthy of friends, which is something many teenagers, sadly, fall victim to. My heart broke seeing something I've gone through spelled out on the page to analyze like an outsider.

Writing: 4 Oseman's writing is just so honest to the teen experience. She nails the intensity of emotions and portrays them so beautifully. It's almost shaking. She writes friendship centered books with perfect skill. I can't wait to read her latest book.


Other Books by This Author...
Radio Silence: Review Here