The Me I Meant To Be 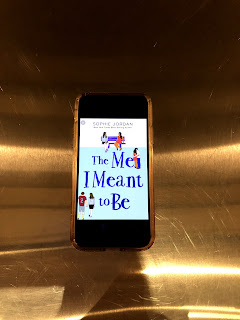 The Me I Meant To Be by Sophie Jordan (January 1)
Overview: Girl code means don't date your best friends ex. Even if you've loved him longer than she has. Even if he's your next-door neighbor. Even if he's finally interested in you after all these years. High school code means that you don't date the dorky Merit Scholar when all your exes wear football pads and are on a winning team. These are the problems that cellist, Willa, and popular girl, Flor face. Their friendship hangs between their relationship problems, and it's in danger of dying out. Overall: 4

Characters: 3 High school stereotypes abound in this book. It made it really hard to get through the opening because the characters felt flat and lazy. The only character injected with an ounce of charm was football star, Zach, but that's not to say it isn't out of character for the football star. Luckily, as Willa gets closer and closer to Zack and their relationship progresses she starts to come to life and take in some of Zack's dimension. Her older sister, niece, and Mom all flesh out well toward the end.
Unfortunately, Flor's chapters don't pick up in the same fashion. She's stilted and a bit too much of a whiny rich girl, no matter how much she says that's not who she is. And the guy she falls for, Greyson, can't be a viable dating option until she finds out this super manly secret detail about him. Because, you know, if you're popular you can't date a smart guy (my eyes almost got stuck I rolled them so hard at this). Her family situation that's supposed to make you feel sympathetic to her is just as petty and undeveloped.

Plot: 4 The plot certainly did pick up. There was enough twists and action from Willa's chapters to carry the story even when Flor faltered. While I wasn't a fan of the antiquated "girl code" and best friends pitted against each other stories, when Willa and Zach are finally honest with themselves, the romance is pretty good.

Writing: 3.5 The writing improved with everything else. It seemed that Jordan's confidence increased with the story. From about halfway through, I felt compelled to keep reading till I got to the very end. Though the story would have been better with just Willa's POV, Flor's wasn't too hard to get through. Her story was cute enough but never really fleshed out like Zack and Willa's, and I didn't appreciate Flor's dated ideas on dating Greyson.
The other major problem I had with this book was that the setting didn't ground the story. It felt a bit unnerving, like the story was just floating in a random space that wasn't well defined. The setting doesn't have to be a major part of the story, but it has to be a real presence. Until I was 73% through I could only guess off of one off sports team references that it took place in Houston, and the vague places mentioned did not match up with the city well. I don't normally harp on the setting much, but it's deep absence, and the fact that it was set in a certain place and then that place wasn't brought to life, bugged me continually as I read.


Links of Interest:
Books in Schools: Here
The Astonishing Color of After: Review Here
Odd One Out: Review Here
Save The Date: Review Here
Reading Spotlight New Releases