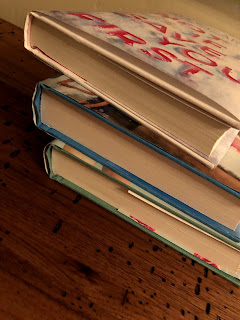 I've noticed that every time I talk about how schools make poor choices in their reading curriculum on Twitter, I get like twenty more likes than usual (which means I get twenty likes), and so I thought I'd bring it here to spread the conversation some more.
I'm finally in my final year of high school English, so I'd say I have a pretty broad feel of what the general curriculum looks like. Mostly, it's books written by older white men from the distant past writing for adults from the same distant past. And, for some reason I haven't quite figured out yet, some governing body took a select few of these novels published for adults of the time, dubbed them "classics" and proceeded to shove them down the throat of every American teenager.
I'm not sure what they were trying to accomplish with that plan, though. You're giving a book to the wrong audience. While thrillers like Steven King might have crossover appeal, most adult books are marked to adults for a reason. It talks about problems they're encountering in their lives. It's relatable. Sure, people read outside their age category all the time, like adults who make up the majority of the YA market, but they've already experienced that time of life and can relate to the emotions. Teens have no reason to relate to people who are struggling with their mortgage or struggling to find a man with enough money to support you forever or being regretful of the life you chose. While adult novels can have universal emotions too, it's hard to unpack those from a place that many teens have never been.
This does a two fold of disservice. One, it's making middle schoolers and teens think that reading is only stuffy, academic, and entirely unrelatable. Two, it gives the classics teens have to read a bad reputation because they just read it at the wrong time. What made me think about this more recently, besides having read a ton of school books where I thought, "This could be good if it was remotely relatable", was hearing John Green mention on his podcast that as a teen he totally thought The Great Gatsby was awful, but reading it as an adult, he realized that there was much more there than he thought. It isn't that teens can't comprehend and parse complex texts or adult issues, but it's that they can't relate, and therefore, enjoy doing it. Also, many of these novels are written in a dialect that might as well be a foreign language to most. When it was first read, these works were in a voice that was authentic to the time, but that's changed, and, therefore, the purpose of the work has changed. It becomes a piece more of historical value, capturing a specific time and place and hopefully bringing it alive. At some point, it should just be accepted that people will either find the classics when they're ready or not, but shoving them at an audience they weren't intended for it doing a disservice to the author and the reader.
Back to my original point, though, when you're only giving kids books written for someone in their thirties from a hundred years ago that they have to work to understand, they'll never be avid readers. The only people who love reading that I know discovered it for themselves outside of an English class. Most people that are avid readers bemoan the books they have to read for English. With the Hate U Give coming out and being included in some forward thinking high school classes, everyone has heard countless students realizing their love of reading through seeing themselves or their struggles shown on the page. If schools only put enough diversity in their reading lists to understand that books are as topical as their favorite TV shows, teens might start binge reading books along with watching shows which helps increase literacy. YA books are some of the most emotional, beautiful books out there, and they abound with the same figurative language and rhetorical devices that English classes repeat time and time again. Building a love of reading can happen simultaneously with building vocabulary, writing skills, and critical analysis ability. Maybe, if kids can really engage with their assigned books, more kids will engage with the texts instead of the Cliff Notes.
At the very least, though, schools, teachers, and the wider world needs to recognize YA as the valid literature it is. I can't tell you how many disapproving books when I name a YA title as my favorite (I even had one English teacher look down on me for saying Romeo and Juliet was my favorite of Shakespeare's which was weird). There are even some schools that have ban it from counting on independent reading. By belittling a category that keeps people reading from childhood into "worthy" adult lit, people are only hurting the cause of keeping reading alive. Mixing YA in with classics allows kids to discuss and analyze issues that are close to them and effecting their daily lives instead of replaying events that have already been resolved. That's what history class is for. English is an active engagement with society and the world. And, maybe, if curriculum builders are forced to choose a limited number of dated books, they'll pull the true gems that really cross time, place, and age and make students not groan every time the new school book list comes out.


Posts Like This...
Current Summer Reading Does More Harm Than Good: Here