Somewhere Only We Know Review 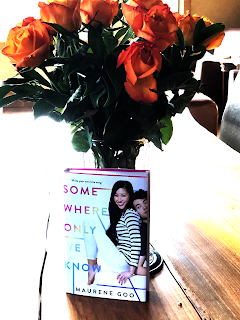 Somewhere Only We Know by Maurene Goo (328 pages)
Overview: Lucky has taken over the world, or, well, the K-Pop world, but the rest of it is coming. Hard work, dedication, and sacrifice has gotten her there, but it also means she doesn't have much of a personal life anymore. Her life has started to lose it's luster. When she wanders away from her hotel after taking a mix of sleeping pills and anxiety medications, she meets Jack, a budding tabloid photographer. When he can't figure out where she came from or connect her to anyone who knows her, he takes her back to his apartment where he realizes that "Fern" is Lucky. It's the story that will launch his career; it's the day that will redefine her career, but they're in it together. Overall: 4

Characters: 4 Lucky is very sweet. She wants what's best for everyone, but that also leads to her leaving nothing for herself. Going out with a boy and seeing the world is something that's a totally new experience. She eats her way through Hong Kong with Jack, and they enjoy each other's genuine company.
Jack is stuck at a banking internship with his father and staring down a future that he couldn't want less. He wants to be a photographer, but he doesn't know how to get there with his family's expectations. Meeting Lucky changes his view of life, but it also shakes his established idea about celebrity to its core.
My only issue with these characters is that they have their cute and funny moments, but, overall, they don't have much of a definitive personality. They don't pop off the page like some of Maurene's other characters.

Plot: 4 I love the single day timeline. It really heightens the stakes. There's lots of food and tourist sights that are fun to learn about. Overall, it's a bit hectic, but it's still a lot of fun. One interesting complication that reminded me of 10 Things I Hate About You was that Jack starts off their day together seeing it as a paid tabloid assignment. Jack has to reconcile his guilt about what it means if he really does fall in love.

Writing: 4 This is a fun read, and I enjoyed the premise a lot, but I feel like it just didn't sing like I was expecting it to. I found the voice to really be absent. from the story. It has much more focus on plot than her past works, but, in the end, the characters were at the forefront and really felt forgotten.