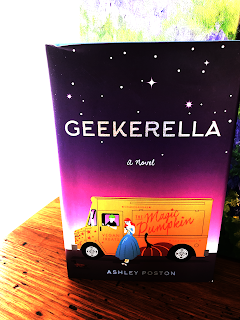 Geekerella by Ashley Poston (319 pages)
Overview: Ella's life has been horrible since her father died and left her at the mercy of her stepmother and twin stepsisters. She's tasked with all the cooking and cleaning, and she isn't aloud to do anything for herself. Working at the Pumpkin food truck is her only chance at escape as she saves up the money she needs to leave. When her father's brain child, an Atlanta comic con, offers a costume contest that could give her access to the premier of her favorite TV show's reboot movie and $500 to kickstart her escape, Ell hatches a plan. With the help of her coworker Sage (and some lucky magic), Elle gets her chance to go home to the Con. Overall: 3.5

Characters: 4 I have really mixed feelings about the characters. I liked Elle, Darian, Sage, and Cal, but, since the book is a fandom retelling of Cinderella, their fairytale source material really restricts their personal exploration. Darian is Prince Charming, but he's also the star of the new movie. While he has his sweet, lovable moments, Poston paints him too closely into the movie star trope to really fall in love. Elle suffers a similar fate in having to check all the Cinderella boxes.
Sage is my favorite character by far. Though she's not truly magical, Sage's fairy godmother position works well. She helps Elle build her costume and then supports her through all the difficult trials that lead up to the Con. Sage works so well because she is so firmly Sage before she's the fairy godmother trope. She's able to expand and push the boundaries of the role in a way that made her a very fulfilling character.

Plot: 3 I have the same problem with the plot that I do with the characters. I love the idea of a modern Cinderella story (and Cinderella working in a pumpkin food truck!) but keeping the beats of Cinderella's story perfectly intact left some parts lagging and some areas stilted. The original tale makes it feel like Elle and Darien are compromising their story to a timeline that isn't honest to them.

Writing: 4 Overall, I thought the book was fun and cute! Even though there were parts that fell flat, it was endearing and sweet. I wish that certain elements of the classic tale had been let go to be better tailored to Elle. Also, it might just be me, but it drove me crazy that every time there was a cuss word there was like the first two letters (like sh-) or "frak" subbed in, which I've never even heard before, in place of just owning it and saying the word. I'm cool if you don't want to cuss in your book! But if you're going to essentially write cuss words, don't  pretend like teens don't know what you're trying to say or that they can't handle the real word. It took me out of the story and turned me off from it.


If You Liked This Book...
Ship It:Review Here

Links of Interest:
Reasons to Preorder Books: Here
How It Feels To Float: Review Here
Into YA with Dan Zolidis: Here
Guest Post with Kristy Fairlamb: Here