Into YA with Arvin Ahmadi 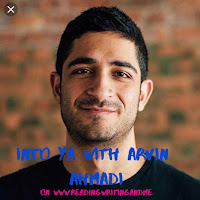 I'm so excited to get to finally be posting this interview. I read Down and Across in January and absolutely fell in love with the story. I never imagined that I'd actually get to talk about it with Arvin! He also has an awesome new book coming out called Girl Gone Viral which is out next week! I've posted reviews of both of his books, which I suggest you read if you're not familiar with his books before launching into the interview (Girl Gone Viral, Down and Across)!

1. Girl Gone Viral is set in the near future which means that you got to build your own world based on our current framework. Brands like Tesla have risen in popularity while other elements of today’s culture like Instagram have faded into obscurity. How did you decide what made it into the future?

Quick story: When I was a kid, I was obsessed with Pokémon cards. (I promise this is related to your question.) They were all the rage on the playground. I collected them, traded them, pretty much made them my life. Today, Pokémon cards aren’t really a thing anymore, but that doesn't mean that Pokémon, the cute little anime creatures like Pikachu and Charmander, have faded into oblivion. Pokémon Go is huge. It is even more immersive than the flimsy paper cards I used to play with. If anything, Pokémon Go has brought us even deeper into the world of Pikachu and Charmander.

That was how I modeled my near-future world: similar to our world, but more immersive. We’re still Instagram-obsessed, but now that app is called “Zapp” and involves multiple phone screens. We still have Reddit, but it’s called Livvit. I wanted to crank up the volume on technology. The pace of this world was very important to me; I imagined a speedometer, with the needle increasing to a million miles an hour.

2. The future in the book is almost a mirror future to our current reality. There’s a tedious political situation, and racism and sexism and still major issues. Do you think there are ways to implement changes now so that the future doesn’t continue to repeat the past?

Wow, you’re asking some hard-hitting questions. Pulitzer Committee: take note! To answer your question, I absolutely think there are ways to implement changes now so that the future doesn’t continue to repeat the past. You know how we talk about representation in books? That’s a big conversation not just in book world, but in Silicon Valley, too. We need diversity in tech and politics, so that gadgets and policies are being made for everyone. Similarly, we talk about books as empathy-delivering devices, but I think we need more empathy in all parts of our life. I think often about this NPR piece about the decline of empathy, and… I don’t know. I just think about it a lot. And I worry that if we don’t make strides in attempting to understand why different people act they way they do, the future could get pretty dark.

3. After Down and Across, your first book, which is a YA Contemporary, Girl Gone Viral is a bit of a genre shift. Did you always want to do a project in the near future, or did this story surprise you? Are there any other genres you want to explore in the future?

The story didn’t surprise me at the time, because I was working at a tech company, but it surprises me now. As soon as I left my job, I felt the absence of tech in my life, so I put it into this story. Also, I wanted to challenge myself and write something completely different from Down and Across—different protagonist, different plot, different world. But now it definitely surprises me. I don’t think it’s a coincidence that I managed to incorporate hijinks and family into a tech thriller. And of course Opal and her friends trying to find their place in the world. Those themes are my jams. They will always be what I gravitate towards in my writing.
4. Down and Across is one of my all time favorite books. It dives into self exploration and understanding while being set outside of high school. What inspired you to write that story?

You know, I'm a big believer in the idea that sometimes we have to get away to figure out who we are. For some of us, that’s summer camp. For other people, that’s college. For Scott Ferdowsi, it happened to be a big adventure in Washington, DC.
It’s like when you get into a really big fight, and then a couple days or weeks later, you think about it and you’re like, “Oh. That wasn’t actually a very big deal.” That’s the beauty of distance. It gives you clarity. It gives you perspective. Scott had to leave his sheltered life in Philadelphia and meet people like Fiora and Trent to better understand what he wanted out of his life (and of course, to see how much his parents really loved him).

5. I know that Girl Gone Viral hasn’t even come out yet, but I’m already excited about what’s coming next! Can you talk (or at least hint at) any projects we might be seeing soon?
Speaking of distance… my next book is set in Rome! In a lot of ways it's similar to Down and Across--it's a runaway story, and there are plenty of hijinks--but it's also a lot more intense. I get really personal in it. That’s all I can say for now :)

Links of Interest:
Geekerella: Review Here
Reasons to Preorder Books: Here
How It Feels To Float: Review Here
Into YA with Don Zolidis: Here
Author Interviews Into YA Reading