Into YA with Carrie Allen 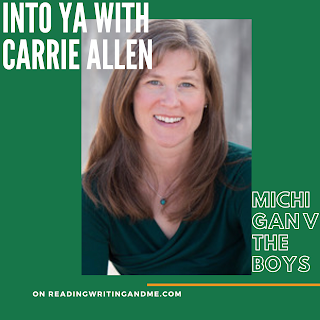 I'm so excited to get to talk to Carrie about her debut book, Michigan vs. the Boys! I met Carrie last year during Pitch Wars when October 1 seemed so far away. I was so excited to get to read her book because I knew how wonderful she was as a person and as a writer from the advice she's given out. I wasn't disappointed! It's so cool to read a book about something like a hobby or a sport written by a person who has expertise in both writing and the topic they're writing about. Anyway, if you haven't heard about Michigan, I'll link my recap post from earlier in the week in a few places so you can get an idea of the plot. Otherwise, enjoy the interview and remember to buy a copy of Carrie's book on Tuesday October 1.

1. I don’t know how I’ve never asked any of the author’s I’ve talked to this yet, but as I was reading, I kept wondering how you got the idea to tell Michigan’s story. I know you’ve been involved in sports in a ton of different ways for a long time, but where did telling a sports story as a YA novel come into play?
I worked in sports medicine both at the high school and collegiate levels. You know when you're watching football and a player gets hurt and the guys with the golf cart come and take him off the field? That was me. My athletes were amazing and I loved working with them, but it's an all-consuming career. A 55-hour week was an "easy" week, 70 hours was standard, and there were even a few 100-hour weeks every year. After a decade of that, I suffered some serious burnout. So when we were ready to have kids, I semi-retired to stay home with them. Suddenly, I had free time again (yay for napping kiddos!) and since I missed my athletes and I missed playing competitive hockey, it was natural for sports to show up in my writing. It was also natural for me to gravitate to the young adult age group that I'd worked with.

2. I’m pretty much a sports novice (though I did understand Jack’s swim stuff because of my friend), but I found reading about all the hockey action effortless. Even though you didn’t define terms outright, I felt like I picked up the idea of the choreography seamlessly. Was it difficult to write these action scene? Do you have any tips for writers who are trying to make technical parts of things like sports accessible to all readers?
I am so glad to hear that the scenes flowed for a non-hockey reader! Writing sports action scenes is difficult in that I want them to be relatable to both athletes and non-athletes. I don't want lose my MC's voice or have it be inauthentic, but she also can't use terms and phrases that would confuse readers. I try to concentrate on my athletes' emotions and thought processes and use their five sense so that hopefully non-hockey playing readers can relate to her in that moment. I also try to make sure that the sports action scenes connect to the overall story so that I don't lose readers in the action. It works well in MVTB because it's easy to have conflict with your own team on the ice!

3. Michigan goes through a lot in this book. In an attempt to run her off, her male teammates turn hazing into abuse. They seem to escalate as the book goes on and she proves her determination. She stays silent for most of the book because it’s clear that even those in power will blame her or see it as proof that she is weak. This happens in all kinds of fields, and, even though we feel like we’re moving forward, there are so many girls like Michigan out there. What do you think we can do to change the toxic, sexist culture both within sports and on the whole? Do you think that if Michigan had tried to find help earlier in the story people would have listened?
Sports-- and society-- needs a giant culture shift. We have to normalize the picture of a girl in hockey pads. We have to give equal value to women in sports: equal pay, equal coverage, equal standards. One simple thing we can do to give equal value to women is to stop using gender qualifiers when we talk about sports. You'll notice that I never qualify my athletes as "female athletes". They are athletes, same as the men are. Their sports are not mini-versions of men's sports.
The sad fact is that if Michigan had complained about the earlier "pranks", she would have been told that boys will be boys. She would have been told that she should have known what she was signing up for. She would have been told that she-- and thereby all girls-- clearly couldn't handle playing on a boys' team. How do we fix this? First, by bringing attention to it. Second, by finding allies or being an ally. Listen to girls. Believe them. Stand with them. And it's going to suck for the girls out there who have to blow the whistle. But it'll suck less for the next girl. And the next girl.
And the next boy. Because I think it's important to point out that while this story was written from Michigan's POV, the season was toxic for the boys on her team as well. And yet, the hazing described is pretty standard for many boys' sports. This is part of that culture shift we need. It's time to break that tradition.

4. Michigan becomes a huge deal for what she’s able to do on the ice, and she has to also wrap her mind around being a role model. It’s amazing to see the impact she has on the girls in her town, and this happens in real life too, but creating visibility is important to make that happen. What should we all be doing to support female athletes and the organizations that give them a place to play? Are there any female athletes that we should all be watching?
There is so much we can do and the best part is that it's simple and FUN. First, watch women's sports! Watch on TV, stream events, go to a local game (high school, club sports, local college sports.) Buy a jersey if you like a player. Follow her on social media. Follow the governing bodies, like @USWNT. It is crucial for women's sports to prove they have the numbers and the platform. Athletes can't pay for training, travel, and cost of living on the salaries or prize money that most women in sports earn. They rely heavily on sponsors. But sponsors won't invest unless they know they'll reach a large number of fans, and right now, women only get 4% of sports media coverage. Use that like button on social media! Let corporations know you're paying attention to women in sports. If you liked Michigan, follow the @PWHPA and @NWHL on social media to keep up with games and highlights. Again, letting these organizations know that you're interested in women's hockey means they can take those numbers to investors and sponsors to grow their operations. The great thing about social media is it allows us to find and watch and support athletes that aren't in the mainstream media coverage. And of course, the Olympics is next summer! Heading into Tokyo, I recommend watching Simone Manuel (swimming), Simone Biles (gymnastics) and the US women's soccer team (hot off their 2019 World Cup win!) Another summer Games fave for me is wrestling-- the women are physically and mentally incredible. Softball is finally making its return to the Olympics (!!) and I'm excited that rock climbing is debuting! (Go follow AlexJohnson89 on Instagram for drop-dead amazing pics.) Can you tell how I feel about the Olympics?? Clearly, no one should plan on me being productive for those two weeks!

5. I’m always curious to know: Do you have any new projects you can talk about?
I'm always working on something! Right now, I have a fun, prank-filled ski and snowboard book that's trying to find a publishing home. I'm currently drafting a girl-power, patriarchy-busting, football-Battle of the Sexes manuscript that explores the spaces (or lack thereof) that girls are granted in sports. Because, as Jack says when Michigan points out that they'll probably tell her she can't try out for the boy's team: "Then don't ask."


Books by The Author...
Michigan vs the Boys: Review Here