Into YA with Candace Ganger 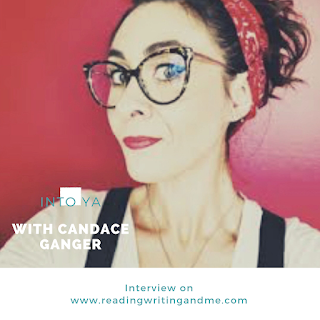 Today I'm chatting with Candance Ganger as a part of the blog tour for Six Goodbyes We Never Said. I reviewed it on Wednesday,  so if you missed that I'll link it so that you can learn more about the book. I hope you enjoy our conversation.


1.You've built a story based around two points of view, Dew and Naima's. Their voices are both extremely unique. How did you get in touch with their different voices, and what made you want to tell the story from both their points of view?
Thank you! They're based on different pieces of me from various stages of my life. Sort of the dark and the light in different contexts. Six Goodbyes was originally only Naima, but as the story evolved, it became apparent Dew needed his own arc. My editor is the one who suggested the addition. Without her, I'd still be waffling on what lip color Naima should wear.


2. You beautifully communicate Naiinia and Dew's struggles will mental illness, including PTSD and OCD along with heaps of grief. Was it difficult articulating such internal struggles? Yes and no. These are things I've written extensively about for years, but at the same time, I wanted to be sure I captured my experiences exactly as they happen. As you can imagine, that's not easy. I had to step outside of myself to see Dew and Naima from the outside, in, which meant doing the same to myself.


3. The book plays with some interesting additional tidbits including Naima's voicemails from her father, Dew's radio shows, and short, third person chapters that better fill in the audience on these characters. What made you decide to include these pieces? How did you decide what information to include in them? My editor gets the credit here. When I get set on an idea, it's hard to pull me out without alternate advice. She understood what I wanted to do and helped guide me towards the ideas to best convey the stories. When I think of the voicemails, those are what I imagine my biological father would've left me if he'd had the chance, and Naimma's responses are likely how I'd have replied.