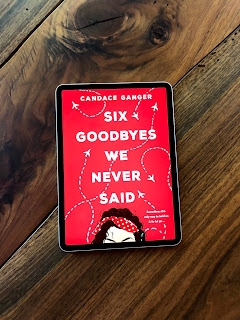 Six Goodbyes We Never Said by Candace Ganger
Overview: Naima struggles with OCD, PTSD, and GAD as well as her father's death overseas while serving in the army. It's extra painful because it happened on a tour he was never supposed to be on, on a date he was already supposed to be home celebrating Naima's 17th birthday. She goes to spend the summer in her dad's hometown with her grandparent's, processing her grief and struggles.
Dew is adopted and has recently moved to his new town with his new family. He's still stuck in his parent's loss, and the loss has triggered a deep social anxiety that he has to learn to overcome. The two neighbors have to overcome deep hurtles to meet each other and start healing together. Overall: 3.5

Characters: 4 Overall, I did like Naima and Dew. Naima struggles with a lot of mental illness issues on top of her complicated grief and resentment towards her dad. They were super close, but, over the last year, Naima had cut him off as a way to cope with her abandoned feelings.
My favorite part about these characters is the support systems they have. None of them are perfect, but they all try so hard. Dew's adoptive parents Stella and Thomas try their very best to understand and help both Dew and Faith. Naima's grandparents, despite having lost a son, channel all of their energy into helping her get through her grief.

Plot: 3 I had a real struggle with the story itself. The problem is that the story is not grippingly internal enough to be a super character driven exploration while also not having enough action or external conflict or development to keep you interested. It eventually got into a groove, but I felt like the last 20% (I read it on my Kindle so I don't know the exact pages) dragged on forever.
I also had a very hard time keeping the date/time straight as the story progressed. Time didn't have a seamless transition when moving between Dew and Naima which was really jarring. It made me feel like I could never get grounded enough in the story to connect with it.

Writing: 4 I do have to commend Ganger on her ability to write two separate POVs with very strong voices that are identifiable. There were some issues with the dual POV, but the voice was on point. I also do want to note that in the ARC, there was a very nice author's note that talked about her personal connection to the material and explicitly listed the mental illnesses Naima and Dew battle with (which is helpful as a reader and reviewer) and gives potential triggers. I'm not sure how much of this information will carry into the final version, but I hope this content appears somewhere as it was very thoughtful and helpful.