Recommended For You YA Book Review 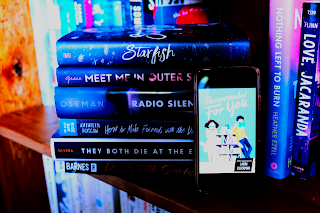 Recommended For You by Laura Silverman
Get a Copy!*
Overview: Shoshanna's job at her local indie bookstore Once Upon isn't always fun, but the store is still her favorite place in the world. During the holiday season when it's extra busy, it's even more fun. That is until Jake shows up. He's the hot, new, teenage boy hire who isn't a reader and isn't particularly keen on listening to overly enthusiastic and sometimes bossy Shoshanna. Locked in a heated competition for the holiday bonus, Jake and Shoshanna are forced to up their bookselling game. Over the course of the week, though, they come to realize maybe they don't hate each other quite as much as they thought. Overall: 3.5

Characters: 3.5 Shoshanna is the main character, and you won't forget that. Her voice in this book is strong and all encompassing. Even though I didn't mesh with her doesn't mean her character wasn't well drawn. It was sort of masterful in a weird way. Shoshanna is like a lot of people I know who are my age. She can only see the world through her very very narrow point of view. Things are extremely black and white, and she is incredibly impulsive. She never thinks about the consequences her actions will have for herself or others. Maturity isn't her strong suit. Shoshanna represents a very specific kind of person, and she does it well. I just struggled with her at points because I don't mesh well with that kind of person in real life either. Her growth and ability to see the world from other directions is a major part of her development in the book. I think that's an important experience to represent in YA; it's just not one I connected to.
One issue with Shoshanna's limited world view is that she sees those around her in a very specific way that lacks a lot of nuance. As she kind of awakens to the world, the people around her do get more vivid, but it's hard to get invested in any of them through her eyes. They're just so singular. Again, I don't think this is the fault of the author, it's just a symptom of our narrator.
For this reason, I found it hard to root for the romance between her and Jake because the chemistry really wasn't there for me. I did like seeing them get to come together and relate to one another on a deeper level because they discover they're both Jewish and the winter backdrop of a very Christmas loving place gives them many bonding moments. Those pieces of connection were some of the strongest of the book. Her friends suffered a similar fate to Jake.
I also found the conflict between her moms and the impending question of whether they would divorce interesting. Again, there's not a very broad view of it, but these conflicts propels a lot of Shoshanna's growth.

Plot: 3.5 The plot covers a week in her life. There's a lot of detail, but the pacing is quick. It's an easy read to get through. There's a lot of workplace hijinks and drama that comes from the bookselling competition. A lot of the book is Shoshanna and Jake are trying to one up each other with progressively ridiculous selling techniques. There are a couple subplots- the one with her moms, her friend who wants to be a beauty influencer, and the bit of romantic undertone- but none of them felt super significant next to the focus on the bookstore. They basically act as ways to demonstrate Shoshanna really not considering the broader ramifications of things and inserting herself in inappropriate ways. They then become learning moments.

Writing: 3.5 The voice is so all encompassing. It almost sends an electric charge through the book and the intense voiciness (not sure if that's a word, but I'm using it) never fades. While I think it hampers some elements of the book, I think if you look at it as a book purely about a week of Shoshanna's life it's brilliant.
Also,  for the lack of realism in the YouTube subplot, the vivid descriptions of ridiculous happenings in bookstores is spot on. A lot of the anecdotes at the store are things that I experienced firsthand while working at a bookstore. One that particularly struck me was a man who asked Shoshanna to help him find a book he was looking for, but all he could remember was that it had a green cover. I had the exact same experience. That element, and the ultimate arch of the store itself,  were probably the most interesting/rewarding part of the book for me.

If you're interested in Laura's books, I highly recommend reading You Asked For Perfect. It's one of my favorite books of all time and so compulsively relatable about senior year and college application pressures.


More From This Author...
You Asked For Perfect

All The Music Things...
Breaking Down Sasha Sloan's "Lie" and Fletcher's "Bitter"
Thoughts on Billie Eilish's "my future"

Links of Interest:
Larger Than Life: Boy Band History Book Review
Halsey's Manic Meets YA
More Than Just a Pretty Face Review
Wordslut Review
*All purchase links in this post go to BookShop through an affiliate link. That means that if you choose to buy the book, a small portion of your purchase goes towards supporting the blog at no extra cost to you!*
New Release Wednesday Reading Weekly Reviews and Recommendations