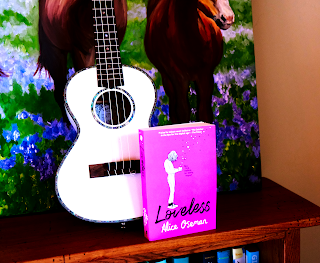 Loveless by Alice Oseman
Overview: Georgia is moving 300 miles to start university with her 2 best friends. She's looking forward to branching out and finally living her life since she hasn't had much of a "typical teen" experience. As the semester progresses, Georgia starts to delve into her friendships and her identity more. Overall: 4.5

Characters: 4 I really liked and connected to Georgia. She starts the book feeling lost and like she's been left behind by her peers. We share a lot of the same worries about not having had typical experiences or wondering if we're missing out. I think that's why I connected with her from the start. She's also anxious and weary of a lot of the same social events as I am. Georgia is also trying to figure out where she is on the sexuality spectrum. Her best friend is a lesbian and her roommate is pan, so Georgia is very open to that idea, but none of those labels feel right. This book is own voices for aromantic and asexual representation, and through Pride Society and some of her new friends, Georgia discovers these labels before taking them as her own.
Her two best friends from school, Pip and Jason are great, loyal friends. Pip is the most vivacious of all of them and try to push each of the friends out of their comfort zone. Jason is quieter and good at reading people's comfort levels. He's very attentive and even though his time on the page is limited, you know he would make an amazing friend.
Then there's Georgia's roommate, Rooney. Rooney is a partier, a drinker, and loves to show up at their room in the wee hours of the morning. While she's definitely not Georgia's speed at the start, they bond over their shared life confusion and the Shakespeare Society Rooney so passionately starts. It's really nice seeing them fumble but ultimately come to understand each other's very different outlooks on life.
Finally, there's Sunil who is Georgia's College Parent and a third year. He's also president of the Pride Soc. He's the perfect mentor and parental figure for all the fledgling university students. He helps Rooney fill all the slots for her Shakespeare Soc and finds some joy in hanging out with the group. He also introduces Georgia to what it means to be aro and/or ace. He offers a sense of safety in Pride Soc and in the college. I love the bond he and Georgia form.

Plot: 4 The journey of self discovery is the central element of the book. Georgia has a lot to figure out over the course of the book about her identity and where she fits into the world. She's excited about the possibility of reinventing herself at university, but the more she tries to figure herself out, the more complicated everything gets.
I really identified with Georgia's fear that she missed out on too much teen stuff and not wanting to repeat the same mistakes in university. She starts the book searching for the fanfic style romance she's always dreamt about and leaves understanding that the way she sees, interprets, and loves the world is different than how those stories made it out to be. She can find powerful love connections in her own way, platonically. On the road to that, she definitely has moments of not being a very good friend, and she manages to hurt a lot of friends along the way. There are wounds made, wounds healed, friend fights, and a lot of misunderstanding that turned into a lot of friends hurting each other in a circle without really meaning to. Loveless deals in a lot of raw emotions that sometimes lead to poor decision making. And a lot of those pitfalls are super relatable.

Writing: 5 I'm a fan of Oseman's writing in general. It's always a very close, sort of rambly first person. The chapters are quick and in Georgia's head completely. I love this closeness and unfilteredness of thoughts. I also love how deeply she explores Georgia's relationships with herself and others.
As far as the aro-ace rep, the book has been made sort of a controversial flashpoint. The book is own voices, and originally, earned a lot of praise on bookstagram. People have recently raised concerns the book's rep and found that they didn't click with it. I think this is bound to happen with any book with any kind of representation. Even in the same group, no one will have the exact same experience and some people will have totally opposite ones. I think it's a particularly sore subject here because we have so few books with aro-ace rep and, on the whole, there's little visibility for it in general. While I really identified with Georgia, I agree that everyone needs to not hold this up as the singular aro-ace book. That does more harm than good for everyone. That being said, I think it's a great read to learn more about people on the spectrum of asexuality and it also drives home the point that the lack of understanding of it in our culture is really harmful to asexual and aromantic people. I made a whole list of books with aro/ace/demi representation a couple months ago that I'll leave below in case you want to read more books.