This Is How We Fly by Anna Meriano: YA Book Review 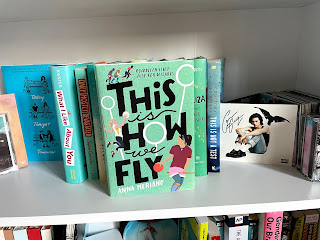 This Is How We Fly by Anna Meriano

Overview: Ellen is grounded for the entire summer. The whole summer. With one loophole. Quidditch. It wasn't even Ellen's idea, but her best friend, Melissa, isn't letting her summer get ruined by Ellen's unfortunate situation. Stuck in a constant battle with her step mom, Connie, and feeling utterly lost as her friend group shifts and realigns before college, Ellen is at a total loss with how to feel about her life, let alone her impending move to college in the fall. Everything is a mess and nothing makes sense, but there will always be hot Houston sun, buckets of sweat, and Quidditch. Overall: 3.5

Characters: 4 I really relate to Ellen, and I'm surprised I haven't seen a YA character more like her before. She's extremely conscious of social issues and the deep flaws in the world, and the hate, injustice, and pure stupidity of things often sends her down somewhat dark spirals about the state of the world when she spends too much time on Tumblr. Her stepmom doesn't understand why she cares so much about so many people. But I think Ellen represents a good portion of Gen Z. We've been online since we were teens, absorbing the constant news cycle of horrible thing after horrible thing. The world is utterly full of bigotry, horrible people, inactive governments, and the looming awareness that climate change will probably deprive us of at least some of our lives. It's a lot of awareness and bad to shoulder all at once as you're also trying to navigate all the less than fun parts of being a teen.

Ellen is grappling with tons of change, which is a huge part of the summer before college. Her entire life is upended, and nothing makes sense. One of her best friends doesn't want to hang out with her other best friend and goes radio silence. The other is trying to get in with the A&M Quidditch players and make new friends for her new life that is distinctly Ellen free. And she also can't avoid the fact that every interaction with Connie starts with an argument, and every argument with Connie makes Ellen feel like her dad is choosing Connie over her.

Ellen is also on a journey with her own identity. She's still not sure about her gender identity, but she's starting to realize that being a girl maybe doesn't fit the best. I loved this part of the storyline because Ellen doesn't come to a major conclusion by the end of the book, and she slowly works out her feelings in moments that come up sporadically. There isn't a huge realization moment, and that felt very realistic to many teens' real experiences. There was one part that stood out to me when both of Ellen's parents tell her that they would support her if she was a member of the LGBTQ community, but they say they'd rather she not because it would be a harder life, and her dad says he's relieved when she tells him he's not. This makes a statement to Ellen that they still view being gay as something negative or okay at a distance, and it isn't nearly as supportive as they think it is. I think these two conversations showed a real divide in the generational mindset and the impact it has on Ellen is important to see.

These moments of realness between these different characters made the book more unique as it seems to truly get some of the granular details of teen life in 2020/2021 (minus the pandemic). It made me realize how few YA books, even brand new releases, feel truly set in the present time.

Plot: 3 The plot is where the book fell apart for me. There were many interesting plot points, and the most interesting ones naturally flowed from the character dynamics. It got bogged down in too many details and extra scenes that really did nothing towards furthering the book. Every evening at home and every Quidditch practice got a portion of the chapter, and that felt unnecessary to me. Also, I'm not into sports at all, so I wound up skipping most of the long passages that gave tons of details about the Quidditch game but nothing about the plot. Honestly, at around 200 pages in, I started aggressively skimming because I was too far in to DNF the book, but I'd also stopped reading because I'd gotten bored. Even skipping past certain chunks, I was able to keep a sense of the plot lines through the book. At almost 500 pages, I was pretty sure this book was too long before I picked it up, and my fear was definitely confirmed.

Writing: 3.5 The only reason I picked this book up in the first place was because it was a gift (and it was also set in Houston where I grew up, which is always intriguing). When I posted it on my Instagram, I shared my hesitations about it because I don't support JK Rowling and I don't like Harry Potter or anything to do with it. Many readers commented that the book didn't glorify Rowling, though, and actually featured a character exploring what it means to be nonbinary and had on page critiques of Rowling. I still feel like it's a strange concept to publish in 2020, but I was pleased with how the book handled that topic and redefined Quidditch as a truly inclusive sport away from its original lineage.

I also enjoyed the style of the book and the author's writing for the most part. Overall, I just feel like the book was overly detailed and wasn't selective enough about what was shown and what was summarized. I loved Ellen, and she propelled me to finish the book because I was able to relate to her internet fueled rage about the world and confusion of how to handle it. I'm still amazed how rare of a character trope that is with authors writing Gen Z characters. If you're on the fence, I have to give the book credit that there was something in it that compelled me to finish it, but unless you're really into Quidditch or desperate for a sports YA book, I'm not sure this one will be the best fit.