You'd Be Home By Now by Kathleen Glasgow: YA Book Review 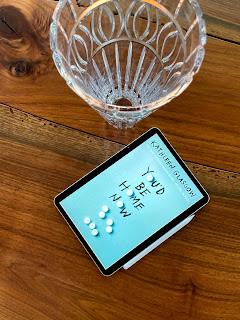 You'd Be Home By Now by Kathleen Glasgow

I'm very thankful to the publisher for providing me with this ARC to share my honest thoughts on this book with all of you.

Overview: Emory has always been the good one. The nice one. The easy one. The invisible one. Her older sister, Maddie, is gorgeous and talented. Her older brother, Joey, is struggling with addiction issues, and her parents saddle Emory with the responsibility of being his forever babysitter. No one thinks about Emory- ever. Which leads her to pick up a habit of stealing and collecting small things and hooking up with the high school baseball star next door to feel seen and important. While Joey is stuck on the rollercoaster of his addiction, his family is right there behind him, and as Emory struggles to keep Joey stable, she's also left to contend with her own precariously okay life. Overall: 5+

Characters: 5 Emory is maybe the most universally relatable teen character in YA. She feels unheard and unseen by her parents and the world. A part of her seems to question if she's lovable, capable of being someone's priority. Because her family life is so chaotic with her extraordinarily strict and disapproving mother, a mostly absent father, and a brother that dominates everyone's time, she acts out in small, quiet ways to try to find a release or an outlet.

Gage Galt across the street knows how to take advantage of that. Shocked that Gage remembered a poem she recited in 8th grade, Emory gets roped into hooking up with Gage in her pool house and letting him take compromising photos of her through the windows. She enjoys the way Gage makes her feel seen, but it also hurts every time Gage rebuffs her requests for them to be together in public, even just as friends. Deep down, she doesn't really want to give him the photos either, but she's overwhelmed by how good it is to feel seen. This is a kind of relationship dynamic that is so common among real teens. Girls are driven by the rush of finally feeling noticed, special, and important, and knowingly or unknowingly a lot of boys take advantage of that. But it's never love when it's about pictures, and from the moment the book started, I just wanted to yell at Emory to run.

Emory starts the book with really no support system (hence the reason Gage is so impactful). Her mother is cold, and if she received any remotely bad news, she'd probably just yell at Emory anyway. And her dad spends so much time at the hospital, he's oblivious to anything going on in the house. She's lost all her kinda friends from dance team because they don't want to be associated with a girl who was in the car when Candy died in the accident that ruined Emory's knee, got her brother sent to rehab, and finally busted Luther. Over the course of the book, though, Emory finds a new, better group- Luther's younger brother who gets Emory's exact struggle, Jeremy, Emory's ex-childhood best friend, Liza, and Daniel from English class who always wears the scarves. Liza is so incredibly smart and witty, and I immediately both wanted to be Liza and be her best friend. And Daniel offered Emory a look at what real, genuine love is. Each of her new friends is dealing with their own family trauma or past struggles, so there's little judgement and heaps of compassion to go around.

Then there's Joey. Kathleen has written about in-patient treatment before (in her debut book, Girl In Pieces), but this book takes on a completely different lens. We experience Joey from his sister's point of view. His sister who loves him more than the world and tries her best to empathize with why he keeps going back to drugs, even as they continue to wreck his life and his family. She shows us the parts of Joey we probably wouldn't be able to see from his perspective. How gentle he is and how sweet. How he's a bit soft and impressionable, like clay. And how a long series of extremely powerful medication, starting from an accident when he was young, sent him down this road. There are so many ups and downs in the story, and though there are plenty of hopeful moments, as in all YA books, she doesn't steer away from the truth.

Plot: 5 I did not want to put this book down. At the beginning, it is much more of a feels book. Emory is drifting through the world, trying to find her footing again after the accident that tore up her knee and her life. We spend most of the first half deeply rooted in Emory's head as she tries to work through her issues. Then, in the second half, there are some major plot moments that switch the book into a more plot focused gear as there are tastes of suspense and nearly heist-like or thriller elements employed. It'll make your heart race and keep the pages turning. Even as Kathleen manages to pack a lot into the plot, all of it makes sense, and nothing feels extra or out of bounds for the story.

Writing: 5 Kathleen Glasgow writes devastating books. This one, though, takes on a different tone for me. It's the first book of hers I didn't cry reading, and I think that's because the book centers the story in a different place. While Charlie and Tiger's stories are achingly real, fresh, and in the moment, most of Emory's trauma is a secondary branch of something that happened to someone else as well. Many times, she feels like she can't fully own what's happened to her because someone had it worse. This book is more big picture than simply sitting in Emory's world.

When I finished it, I wanted to give the whole world a giant hug. Everyone is going through so much and working so hard to hide it. The book made me angry that we live in a wealthy country that lets people live on the street and treats addiction like a moral failing when, more often than not, it's sparked by the ridiculously fragrant overuse of pharmisutical drugs in the medical system. We're more than happy to dispense these drugs, but there's no help provided in using them safely, in slowly weaning off of them. Instead we cast systemically created problems into individual moral failings so they're easier to dismiss and shirk responsibility from. The United States is a country that fundamentally lacks and undervalues support in every single sense of the word from mentalities around how we live our lives to social services to parenting styles to the stupid "pull yourself up by your boot straps mantra". That's what I took away from this book.

Kathleen is an excellent writer and one of my favorites in YA. I really enjoyed this book and its new style and direction while staying close to themes she always writes with so much care and attention. Her books are powerful tools, and that should not be ignored. This was an important book, but it was also a fun read with plenty of light moments, heart racing scenes, and side plots that seem to just exist to make you smile. We get to watch Emory fall down, but there's also the beauty of watching her finally have a community around her to pick her back up for the first time.

Into YA with Kathleen Glasgow

How To Make Friends with the Dark Review

End of Summer YA: August TBR

This is How We Fly Review