The Brightsiders by Jen Wilde: YA Book Review 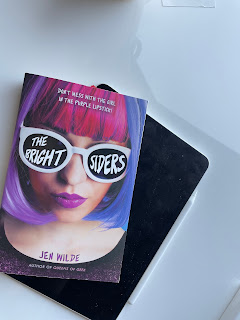 The Brightsiders by Jen Wilde

Overview: Being in one of the world's biggest bands at 17 is a lot to handle. With the paparazzi watching every single move, Emmy doesn't have any space to be a teen and make mistakes. After being in the car when her girlfriend gets a DUI, Emmy kicks of 6 weeks of trying to avoid scandals while falling for a fellow band member and fighting to keep her place in the band. Overall: 3.5

Characters: 3 Emmy is the drummer in the band, and she's the target of the media's attention. Even though Ry parties just as much as she does, she takes all the heat for it. With parents who seem to actively resent her, a girlfriend who's constantly demeaning, and a PR team more concerned with image than health and safety, Emmy doesn't have much of a support system. When she comes out as bi, it's seen as a PR stunt, and basically everything she does gets belittled. When she gets hurt in an accident caused by her drunk girlfriend choosing to drive, she's cast as a horrible role model. Emmy gets torn down left and right. And while I completely sympathize with what she's going through, I also really struggled to connect with Emmy. She has plenty of walls up with the world, but she's also extremely guarded with the reader. It's hard to really get in her head which, in turn, makes it hard to get into the book. I know Jen wanted to make a point about how women are treated in Hollywood, but I think these points would've shown more if the book lingered in each moment a little longer.

The rest of the Brightsiders and their friends fill out the background of the story. Even though Alfie is the love interest, we don't get to hear much from him or get to know him all that well. We get even less from Ryan except for occasional cameos and pop-ins. Chloe is Emmy's most solid friend, but we don't really get to learn who they are either. I just wish there was room for the readers to get into more than who these characters are on the surface.

Plot: 3 Basically, the plot follows a typical romance arc. We see Alfie and Emmy get together and start a secret relationship because them dating could blow up the band. Then they both catch feelings and everything gets messy, but this is a romance, so we all know how it ends. Between scenes about Alfie and Emmy's romance, we bounce between a number of fiascos with the press that unfold for Emmy. While she's obviously mistreated, each incident flies by so fast, it's hard to really fully absorb what's happening. This does mean the book is an easy read. I finished most of the book in a morning. I just wanted everything to dig a bit deeper.

Writing: 3 I've been a fan of Jen Wilde's books for a while. Queen of Geek is still my favorite, but I also enjoyed her latest book Going off Script. I'd bought The Brightsiders a while ago, and I decided to try to read it quickly to check off another book from my physical TBR before the move. It's probably my least favorite of the three. The other two just have a level of depth and maturity to it while still being fun, quick reads that I was missing here. I love that all of their books have characters all over the LGBTQIA spectrum and feature teens with larger than life jobs. I wish this book had dug in a little bit deeper, but overall, it was a fun, quick read.

You'd Be Home By Now Review

This Is How We Fly Review