And They Lived by Steven Salvatore: YA Book Review 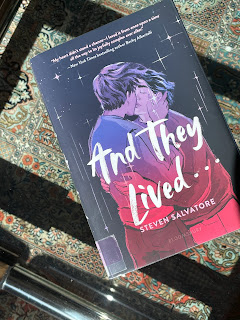 And They Lived by Steven Salvatore

Overview: Chase made it into his dream animation program and is ready to embrace his brand new life in upstate New York as a college student. Though he knows he'll miss his mom and sister, he's ready to strike out as his own person – and maybe find his own happily ever after like all the Disney movies he loves. While college involves facing his ex-best friend who's trying to steal his dream, learning to cope with new roommates, struggling with body image and gender questions, and falling in love with a guy who's just as lost as Chase, it's also a beautiful time to learning and growing with a new support system that understands his art. The stakes are high for Chase at CIA, but the reward will definitely be worth it. Overall: 4.5

Characters: Chase is a bundle of overthinking anxieties. He's still trying to unspool a lot about himself while forming his brand new life as a baby adult (or at least that's the label that feels most apt for whatever a college student is to me). Chase has dealt with body dysmorphia for as long as he can remember, and at times, that has come paired with an eating disorder that harmed his body but earned praise from his dad for its results sine his dad always made fun of him for being too fat. His father is a root of many of his insecurities from his size to being invalidated when he came out as nonbinary a year ago. Chase and his father always get their signals crossed when they try to talk to each other, and the subtle and not so subtle jabs from his dad have piled up into a web of insecurities and hooks of self hatred. While Chase is pushing to win an LA summer mentorship from his animation idol through his freshman seminar, he's also forced to reconcile his past to be able to step forward into the future. Even though I'm very different from Chase on paper, my heart connected with his immediately, and I loved being able to follow his journey.

Chase meets Jack on his first day at school. Jack is on the crew team and a creative writing major who is sweet and sensitive but also undeniably hot. As Jack and Chase's paths keep crossing, they start to form a deeper bond with one another and are able to share that they like each other. While Chase has been out for a while and become comfortable being open in public, Jack still isn't out to his family and is battling intense internalized homophobia. While Chase is patient and doesn't want to push Jack past his comfort zone, Chase ends up caught in the crossfire as Jack stumbles through deciding how he wants to handle his feeling for Chase with the homophobic undertones of his hometown and family. While Jack definitely leaves emotional wounds behind for Chase to carry, there's a chance he could be Prince Charming after all.

The rest of the world is full of fabulous supporting characters who are instrumental to Chase's journey. His roommate Benny becomes the nearby best friend and gay support system Chase desperately needs. Chase's longterm best friend, Rae, goes to a college across the town and is always around for a crisis. Xavier, one of his suite-mates, sometimes lends a helpful hand. Then, there are his junior mentors from his animation seminar who offer more advice than just on the school project, and his animation professor who becomes a mentor. There are so many characters in this world, but it never feels overwhelming or hard to keep track of everyone. Salvatore perfectly captures the tenuous threads of connections you develop when you're first dropped into college. Even if they're not your best best friend, there are so many people you see day to day that change your life in big and small ways.

Plot: I immediately loved the book from the opening chapter as I related to Chase's sad, lonely, empty feelings of being left behind by his mom and sister after he's moved into his dorm. From there, the story just keeps running. Especially the second half of the book was thoroughly unputdownable. From page 100 on, I devoted all of my free time to devouring the book as fast as possible. Jack and Chase's love story is a nail-biting rollercoaster, and there are so many weighty moments as Chase fights for the animation award, contemplates mending a broken friendship, and finally confronts his broken family relationships. There's a lot to balance at once, and it's what makes it feel real to that freshman year of college experience.

Writing: The writing is immersive and honest while still being completely real and in the voice of a confused nineteen-year-old. The story is beautifully crafted to balance character development and maintain the interest of the plot. It's very rare that a book can handle fully representing how large a person's intertwined connections really are from best friends to family to acquaintances that still make a difference without losing the story in the shuffle, but And They Lived simply breathes with a stunning realness.

I also just want to say that this is exactly the book I've been looking for lately. YA stories set in college are becoming more common, but they're still pretty few and far between. As someone in college myself, I've been craving stories about finding yourself as your own person and building a new life that are as real and visceral as this one. Publishing, take note. We need so much more of this.

My Biggest Book Haul in a While

Portrait of a Thief Review