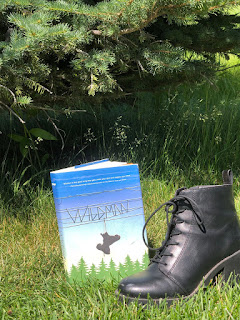 Wildman by J.C. Geiger (2017)
Overview: Lance drives a 1993 Buik. It's the last thing his father gave him before he left to find the true North. Lance is on his way back home to Oregon from Seattle when his car breaks down near the Trainsong Motel. Over a series of days, and a series of different mechanics, Lance comes to know the group the lives in the middle of nowhere outpost and operates The Float, the only bar or restaurant for miles and miles. Overall: 5

Characters: 5 Lance is put in a very difficult position, and that's what he needs to break away from the neat boxes his life fits into. He has a 35 on the ACT. He's valedictorian. He's going to work at a bank in the summer before heading to OSU with his girlfriend. When none of that is relevant, Lance really gets to learn who he is.
There to help him are the sad, misfit group from the Float. There's Meebs and Rocco who give Lance his first rough welcome, Mason who runs the float, and Brenna who everyone thinks is something more. These are the people who are never escaping Trainsong. Then there's Dakota and James, nicknamed Stone, who both dare to look beyond the life they're living at the moment and the life they've lived before. These are the people who inspire Lance to question the world and expand.

Plot: 5 A simple  story of a breakdown in the middle of nowhere that turns into so much more. The physical and emotional action are paced perfectly. There's plenty of antics to give the story motion, but there's plenty of emotional growth to keep you invested till the end.

Writing: 5 This is where the book really sparkles. Wildman boasts one of the most unique voices I've ever read. I love the intention in the sentence structure to build the scenes and set the mood. It's one of the few times a well executed third person limited has allowed me to feel closer to the main character than I think first person even could.