Hey, guys! You're in for an epic treat today because Heather Ezell, author of Nothing Left To Burn was nice enough to agree to an interview with me. We got to discuss her writing process, favorite chapters, and what she's got coming next. Also, she gives us a special peak behind the curtain into her job as a freelance editor which I think is so cool because I love learning about other jobs in the industry! If you haven't read Nothing Left To Burn you can catch my spoiler free review here or go ahead and buy her book here. So without further ado, the amazing Heather Ezell: 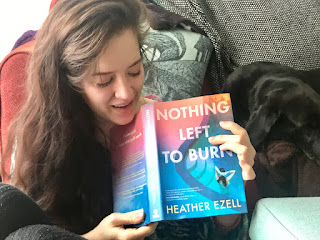 I read that you started the book that would become Nothing Left to Burn when you were fourteen. I’m starting to consider querying the book I started a fourteen, so I’d love to hear about the process NLTB went through between your teenage writing and what we’ve read today.

Oh gosh. The process of writing Audrey’s story was indeed a long one! The novel I wrote at fourteen was titled A Fear of Tears (*cringes*) and, aside from Audrey being in a tough relationship with a sick younger sister and a sort-of friend named Hayden… there is no resemblance between the two books. AFOT spanned out over some six months and there was no fire. I’ve taken to claiming Nothing Left to Burn as an alternate universe for Audrey.

…Meaning the process NLTB went through between my teenage writing and early twenties was A LOT of revising and rewriting and ultimately, finally, when I was twenty-two, a complete overall. Starting at ground zero. The new concept for Audrey’s story occurred mere weeks after I decided to shelve the book for at least five years. Of course, it was when I chose to let go her that it all clicked into place: her internal journal, the fire, Brooks and so on.

I learned how write during the decade of working on Audrey’s story. I learned how to revise, how to take hundreds of rejection, how to put aside a manuscript for some time to gain clarity, how to write new passion projects, how to listen to critique. That development was pivotal. And as I grew as a writer, Audrey’s story grew into what it was always meant to be. It sometimes feels embarrassing that the novel took so long to become what it needed to be but I wouldn’t have it any other way.

You’re book keeps everyone clinging to the edge of their seats with fast paced chapters and a mysterious shifting through the day when the fire hits the community and the days prior. Was it difficult to land on the seamless flow the book has? Did you originally write the chapters in this order, or were they originally separate timelines that merged?

As I mentioned earlier, the first draft/version took place over six months, whereas NLTB spans a mere 16 hours. But the true answer is that NLTB’s structure came naturally, developing as I drafted. When that new idea for Audrey’s story sprung to live and AFOT became NLTB, I didn’t plot. I didn’t think about it. I just started… writing. The drafting process was a two-month whirlwind. It wasn’t until I hit page 100 and it was only ten a.m. on the opening day that I realized, well, cool, this book will take place over one day.

In terms of the non-linear structure, that too came naturally with the new version: I wrote the flashbacks mostly in the order they appeared, the scenes triggered by the present timeline’s events and Audrey’s memories. It all sounds very romantic and magical—the writing process—but I think it came so intuitively because the story had been brewing for so long. If only my current projects would come to me with such ease!

Do you have a favorite moment or chapter?
This is so tough. Narrowed it down to three.
·     The chapter when Hayden drives Audrey home from the party because… I wrote the first draft of that chapter in 2005 manuscript. (Back then Audrey calls an operator for a taxi… using a landline!). It’s baffling that this scene persisted through the drafts but, hey, there it is in a much more polished, hopefully nuanced and modernized form!
·     The birthday scenes at the beach house. I’m not entirely sure why. I wrote those scenes (originally one long chapter) at a similar beach house one summer and I’m so happy they stuck around and developed as they did. There’s a quiet feeling to those scenes and it’s a turning point in Audrey and Brooks’s relationship, as well as Audrey’s starting to gain an awareness of her feelings regarding sex and her relationship with her body.
·     Any scene with Maya. J

You are also a freelance editor, so you must read tons of developing manuscripts. If you had one piece of advice for writers for taking their stories to the next level, what would it be?

Every chapter, scene, paragraph, sentence must be necessary and influence the plot. If the chapter doesn’t cause change—move the story forward—or reveal critical information it’s time to rework it or (in most cases) say goodbye. It’s funny, or maybe not funny, but this is something I struggle with SO much in my own writing. I love to meander off into pretty language and descriptions and interiority that straight up doesn’t ultimately matter. Also, it’s imperative that the protagonist’s desires, setbacks, and motivations are clear and that she moves the plot vs. the plot happening to her.

I’m in high school now, but I’d love to get into the publishing/book industry when I’m older. I would love to hear about how you came to be a freelance editor because it sounds like a very interesting job.

There are so many roads to freelance editing! I started freelance editing after I left graduate school, which entailed also leaving my work as a college composition instructor. I loved, loved, lovedteaching college comp. Loved it SO much and was devastated to leave it (one day I’ll return!). I also missed tutoring writing, which I’d been doing since my undergraduate years at various college writing centers.

So, real talk: I was unemployed, unable to teach because of my health and unfinished master’s degree, that year’s Pitch Wars was wrapping up, and I longed to continue working with writers. So, I decided to take the plunge. And it wasa plunge – freelance is a fickle thing and it takes so much time to build up a solid client base and have consistent income (a rarity). There was also a lot of self-doubt: Was I qualified? Was working with me, in fact, a worthy investment? I’m so glad I tried and am able to continue editing today. The work is so rewarding and, honestly, I often feel I’m better at editing than I am at writing! While I do intend to return to teaching and, of course continue writing, I’ll likely always freelance edit and work with other writers in some capacity.

But the honest logistic of my “becoming” a freelance editor: I added a hire page to my website and around the same time was trained as an editor at Author Accelerator (a book coaching company where I also coach).  I highly recommend contracting with a company like Author Accelerator as a starting point for freelance editing and having another form of income on the side. However, remember, there is no one way!

I devoured Nothing Left To Burn in a day, and it left me desperately wanting more of your work! Is there anything you can tell us about your next project?

You’re making me blush! Thank you so much. I’m not under contract currently (meaning it’ll be a bit of a wait before I hit the shelves with something new) but I do have three different projects in the works. This summer, or probably the rest of 2018 if I’m being honest, is dedicated to drafting and developing two of those. One is a contemporary in a similar vein of Nothing Left to Burn(fast timeline, secrets, death, etc.) that’s set in Interior Alaska and the other… well, let’s just say it involves blood and an old house in a forest.  No guarantee that either of those will see the publishing light of day but I’m entirely enamored and hope to share them with readers eventually! 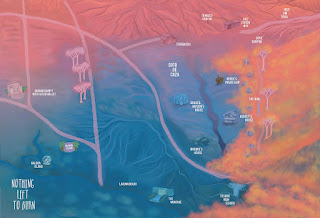 Also, as a bonus, check out this awesome map inspired by Nothing Left To Burn.
March up with Heather on social here:
twitter - https://twitter.com/heatherezell
instagram - https://www.instagram.com/heathermezell/
website - heatherezell.com

Author Interviews Editorials Into YA Reading