Into YA with Deborah Maroulis 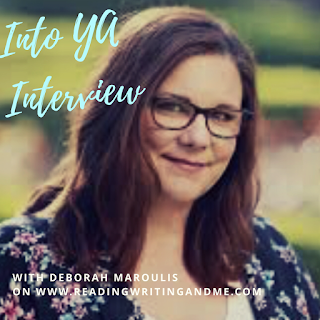 I got to chat with Deborah about her new book! She has a lot of interesting and important comments about the stories she tells in her new book!

1. Within and Without takes place on a vineyard which is a setting that I’ve never encountered before. What made you decide to set the story there?
I decided to set Wren’s story on a vineyard for two reasons. One, Granny’s farmhouse, where she’s living since her parents’ divorce, is based on my own mom’s house. She didn’t have vineyards on her property, though. She had walnut trees. But her home is surrounded by family-owned vineyards who either make their own wine or sell their harvests to the larger wine companies in Napa, so I thought I’d combine a real house with fictionalized agriculture.
The second reason is more symbolic. Wren’s character arc mimics the life cycle of a grape vine, and I thought it would be fitting to have her in a place where the parallels would be easier to draw. (It’s the English teacher in me…gotta love symbolism!)

2. Panayis is such a lovely character. I also was excited that he has a Greek background that he is still very connected to. What inspired you to write Panayis’s story and background the way you did, and did you have to do research to build his character?
Thank you! I love Panayis, too! My husband is first-generation Greek, so I drew on what I’ve learned about the culture from him and his family. In fact, Bubba, Panayis’ truck, is named after my husband’s first car, which was not a farm truck, incidentally… At first, other than being a good cook, I didn’t know much about Panayis’ character. In order to better understand him, I had him clean out his closet. (This is some of the best writing advice I’ve ever been given about getting to know a character.) Turns out the closet wasn’t his. It was his mom’s, and he’d been given the task to box up her things after her death since is was too hard for his dad. Once that part of his backstory came into focus, the rest kind of just filled in.
Fun fact, I tried to get my mother-in-law’s pastitsio recipe for the book, but she wouldn’t tell me her secret, so I was stuck using a generic recipe I found online. I’m not giving up, though!

3. Wren is a survivor of sexual assault, and, over the course of the story, we get to see Wren heal from that. One aspect that may or may not surprise the reader is that her attacker (and ex boyfriend) Jay seems to have no idea he’s done something wrong. A lot of culture, particularly in high schools, glorifies conquest and coercion which definitely contributes to these horrible situations. Do you think that there’s a conversation or shift that will help bring the issue to the forefront or help prevent situations like Wren’s?
I’m so glad you asked this question! One of the reasons I wrote the scene the way I did is because this exact situation happens so frequently. So often, guys and girls feel pressure to explore the physical aspects of a relationship without having or practicing the vocabulary to express what they want or need. On top of that, bodies are changing rapidly and sending confusing signals. Those feelings quickly take over the rational mind and instinct is all that’s left. To prevent the devastation of such a fleeting and life-changing moment, there needs to be discussion around how to approach consent. It is my hope that more honest conversations about sex and consent happen between teens. The more it’s practiced, the easier it gets. Laurie Halse Anderson said it best in Speak: “You have to know what you stand for, not just what you stand against.”

4. Beyond being a writer, you’re a high school English teacher and writing instructor at a junior college. Does your day job influence your writing in any way? Did you always love writing?
Yes, I think I have always loved writing. Most of the stuff I wrote in high school was suuuuuper dark, though! I was addicted to Prince songs and Anne Rice novels, so I’m pretty sure there’s a reference to the color vermillion in every poem (hangs head in shame). I never thought seriously of writing for public consumption until just a few years ago, although it had always been a dream. Luckily, I’m surrounded by people who encourage and support me to do so. Having a background in studying other people’s writing has helped immensely! I have to say, however, that I didn’t learn to write fiction in a classroom. It was only by writing and implementing feedback from people better at it than me did I begin to hone the craft.
I don’t actually teach high school English anymore, although I do teach college-level classes on high school campuses for my local community college. But I did teach high school for ten years and it absolutely influenced my writing. My students offered fantastic fodder for Wren’s adolescent eye-rolling. Plus, they helped me make sure my slang use was on fleek, haha... (I’ll see myself back to 2014.)

5. I’m sure readers will be wondering, do you have any new projects you can talk about or any other exciting writing news?
I do! I’m currently getting ready to go on submission with a story about a teen boy trying to figure out the rest of his senior year and college plans while dealing with a huge case of survivor’s guilt over his sister’s epilepsy and intellectual disabilities. Plus, there’s lots of nerdy Star Wars and Harry Potter references. He can’t help it, he’s a self-proclaimed band geek.
Thank you so much for having me. I loved your thoughtful questions and am so happy you enjoyed Within and Without! I’m happy to offer an eARC giveaway to one of your readers!


Her Books...
Within and Without: Review Here

Author Interviews Into YA Writing Tips