Within and Without Review 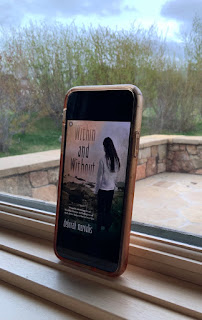 Within and Without by Deborah Marloulis
Trigger Warnings: Sexual Assault; Eating Disorder

Overview: Wren’s life is turned upside down when she has to move out of her neighborhood and into her grandmother’s rural vineyard after her parent’s divorce. Even though she’s still at the same school, she feels detached from all of her friends. Her Bulimia intensifies as she struggles for control. And then the boy she’s pined after for years, Jay, calls her beautiful. As she charts unknown territories, falling for him blindly, the relationship gets increasingly abusive. Wren must find her voice and overcome her negative self image before she becomes  unrecognizable, even to herself.  Overall: 4

Characters: 4 Wren is funny and self deprecating, but, sadly, a lot of her charm and sarcasm stems from a place of self loathing. She feels she’ll never be thin or pretty enough to stand out at school or be worthy of a date. She fosters an eating disorder that gets progressively out of control as her body dysmorphia strengthens. She’s a character that you’ll want to root for.
Panayis is the sweetest character in the book. He’s persistent even as Wren’s abusive boyfriend, Jay, shrinks her world, and he forms a genuine connection with her that she desperately needs. He’s a character I looked forward to seeing the whole time.
Jay is terrifying, not because he’s a particularly menacing jock, but because he’s so real. He’s abusive and isolating to Wren while seeming oblivious to the harm he’s inflicting. He combines charm and compliments to feed on Wren’s self doubt and insecurity. He’s cold and calculating; a true villain that wouldn’t understand the title.

Plot: 4 I thought that Maroulis did a respectful job capturing the reality of sexual assault and the recovery process. The doubt, the panic, the denial, the withdrawal are all shown through Wren’s relatable, girl next door type voice that brings it into stark reality. She handles the topic with a sensitivity and accuracy that makes it a worthy read.
I didn’t love the eating disorder subplot as much though. While it’s important representation and some descriptions and scenes that hinged on it were very good, the story often got bogged down in arguments between the two ways Wren sees herself- “beached whale girl” and “skinny V-neck girl”. I found these descriptions and sections more off-putting than thoughtful and important. It also doesn’t seem as in touch with the rest of the book to the teen experience of today where there are many image focused driving forces. I’m not entirely sure why, but the constant use of those descriptors really rubbed me the wrong way in an otherwise compelling story that put a much needed emphasis on the body dysmorphia many teens experience today.

Writing: 4 Before I dive into the rest of this, I just want to note that Maroulis does an incredible job mimicking how teens text and use Snapchat.
Beyond that, the style here is interesting. It’s a first person narrative, but a lot of it is very much outside of Wren. The reader is overtly clued into things Wren doesn’t notice, and we’re not bound to her so tightly that we fall under the same spell of sorts that influences her decisions. We see the red flags long before she can. While I like this aspect in the commentary it provides on the overarching story, it often made me feel detached from Wren. I would have liked to be a bit closer to her with a bit tighter prose.

Deborah will be on the blog on Friday to chat about the book.