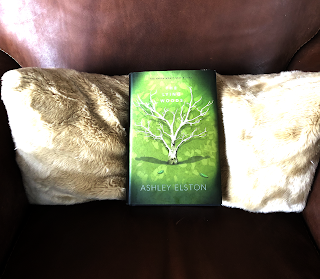 The Lying Woods by Ashley Elston (327 pages)
Overview: Owen's biggest concern in life is dodging Jack's next prank until he finds out his father has disappeared with the entire company's funds. He is forced to return to Lake Crane in shame with his mother and live in his aunt's house. All of their possessions are seized. Everyone gives Owen dirty looks even though he just found out about his father's crimes. An entire town's been robbed, and the weight is on Owen and his mom's shoulders. Owen gets a job at the pecan orchard that Detective Hill directs him to, and he finds the owner, Gus. As he keeps working there, he starts to learn about their parent's romance on the orchard when they were his age... but the story doesn't amount to exactly what it seems. Overall: 4

Characters: 4 Owen starts off as kind of a jerk, but I can't really blame him. He feels as screwed over as the people in town who lost their retirement and life savings. He's also grown up as the ultra-wealthy son of a major fracking company owner who was like the king of the town, and he's gone to an all boy's boarding school since sixth grade. So he's snobby and a touch insensitive until he starts trying to rekindle his friendship with his childhood best friend Pippa and starts working with Gus.
Gus is another great character. He takes Owen on despite his past and his attitude, and his compassion really helps Owen grow. I like that Owen did get the chance to grow and change because it was obvious from the start that his heart was in the right place, and it was nice to see a mentorship type relationship.
I also love reading about Maggie and Noah's love story in 1999. Maggie is Owen's mother, and, while she's not really in the current timeline, she flourishes in the past one. Noah is also lovely and compassionate- someone who genuinely wants to overcome his unfortunate past.

Plot: 4 At first, the story is a little slow. It's interesting to see him start to develop footholds in the town, but the story sort of drags for a while. There's a bright spot when Pippa shows up. She's not super developed, but I love her because she eats candy bars like I do.
It's the last 70ish pages where the story catches fire and you have to speed through to the end because... wow. It's so good. Everything comes together in an OMG way that I doubt you could guess. And then the twists keep coming.
It also cradles perfectly into the summer of 1999 vignettes that are scattered throughout. As that story unfolds, it provides a little dramatic irony to the reader and allows them to start guessing even when Noah just keeps running into walls.

Writing: 4 I liked Elston's writing enough to definitely read books from her again. I wish the thriller part was a bit faster paced at the start and the mystery started getting uncovered earlier. I did love the prelude parts about the parent's teen love story. It's beautifully written and the short bursts fueled me through the slower parts of the book.
Also, if you like unique books, this one is pretty high up there. It's set in Louisana, not a common setting, and deals with fraud in the oil and gas world as well as maintaining and running a pecan orchard. It's definitely more than your standard boarding school book as it seems from the start.