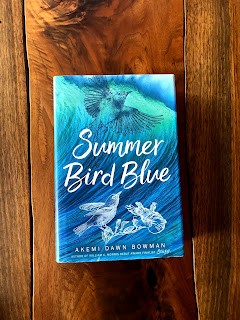 Summer Bird Blue by Akemi Dawn Bowman (373 pages)
Overview: Rumi lost her sister, and then grief drew a canyon between her and her mom. And then it was an ocean as she was whisked away from Washington to live with her aunt in Hawaii for the summer. Rumi has to learn how to confront her grief, her fears, and her anxieties to reclaim her life and heal. Overall: 4

Characters: 4 Rumi is angry. She's always been a bit grumpy, but after landing in Hawaii, she's just an explosion of rage. What started as a coping mechanism for her anxiety turned into armor against her sadness and grief. She shoves everyone out of her life, only to slowly allow them to return.
The mother daughter relationship in the story perfectly represents Rumi, torn between love and animosity. She's always loved her mother, but, as the oldest child of a single parent who worked constantly, Rumi was like a second mom to Lea, her younger sister. Rumi felt like all of her mother's love went into Lea, so not having her mother around when Lea is gone becomes all the more crushing. Deep love and deep anger mar their connection.
Rumi actually has a lot of great relationships with the adults around her. Her crotchety, old neighbor proves to be an amazing friend and mentor, as well as her key to finding music again. Aunty Ani never gives up on Rumi even as she's the usual object of her attacks.

Plot: 4 The story doesn't really start for about a hundred pages. That's the point where Rumi begins to separate herself from her grief enough to explore other relationships and activities in Hawaii. While watching her grieve her sister and replay the same feelings and moments is very honest to the grieving process, it might cause some readers to check out. While I found it interesting, it sometimes dragged on too long, reflecting on ideas that had been explored time and time again. If you're a reader that needs a strong plot to keep you going, I'd say this probably isn't the book for you.

Writing: 4 Bowman crafts an interesting story when the plot is moving. As Rumi begins to heal, Bowman explores other parts of Rumi like her music and possible asexuality as she tries to figure out her feelings for her neighbor, Kai. The situations she finds herself in when she goes out are always so entertaining, it made me wish for more of them. There are some beautiful passages, though, when she is trapped in her own thoughts. I just wish they'd been balanced more.
Finally, I love how much she immerses readers in the Hawaiian setting. She writes certain characters dialogue in the dialect used by some there which really adds to the atmosphere of the story.


Other Books By This Author...
Starfish: Review Here